Bold and the Beautiful Spoilers: Thomas Is Recalculating – Fans Brace For Second Climax 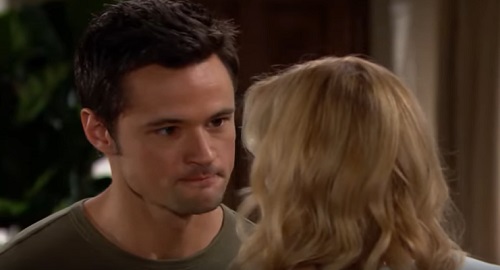 The Bold and the Beautiful spoilers document that Thomas Forrester (Matthew Atkinson) didn’t have a breakthrough, as many had hoped. The effects of the heartfelt conversation he had with Douglas Forrester (Henry Joseph Samiri) at Vincent Walker’s (Joe Lo Cicero) apartment, just prior to Brooke Logan Forrester’s (Katherine Kelly Lang) accidental push off the cliff, seem to have faded.

Having remarkably survived his fall and only spending a short period of time in recovery at the hospital, Thomas is back on the same reckless path to seeming self-destruction. Although, it feels as though he likely never veered from it.

B&B fans know that a fall battle has been established, where Thomas takes on his existing foes and tries to keep his few supporters fooled.

Some storylines go on too long, or far too long. This one, where B&B’s recast character was written back to his unstable demeanor was a bit stretched, but not overly so, as it was only months-long.

The Beth Spencer (Madeline Valdez and River Davidson) reveal appeared ready to trigger Thomas’ full comeuppance. Now, as is being seen, he merely suffered modest injuries as a result of falling approximately one hundred feet off the cliff that his sister’s home is built on.

Steffy Forrester’s (Jacqueline MacInnes Wood) eyes are now wide open. Her realization of Thomas’ choice to withhold what he knew about Beth’s existence eliminated one of two available family members who were choosing to give him the benefit of the doubt. Of course, Ridge Forrester (Thorsten Kaye) is the other.

Thomas does have a third family member who supports him. But Taylor Hayes (Hunter Tylo) is a recurring character and she’s only seen sporadically.

So, the only available supporter Thomas is left with is his dad. Ridge knows everything at this point, including what really happened to Emma Barber (Nia Sioux). Yet he told Thomas that he would be shielded from justice. That happened when Ridge chose not to speak against Flo Fulton’s (Katrina Bowden) immunity deal.

With time to reflect, Thomas hasn’t decided to make amends. Instead, he wants to execute a better plan.

With Hope Forrester (Annika Noelle) soon set to discard her last name, Thomas doesn’t seem to be focusing his thoughts on reconciliation. Instead he wants to exact revenge against his perceived enemies.

Thomas’ list is rather extensive, including Douglas, Brooke, Liam Spencer (Scott Clifton), Flo, Zoe Buckingham (Kiara Barnes), Xander Avant (Adain Bradley) and whoever else comes to stand in his way. And with that a second climax relating to Thomas, specifically, is coming.