BY Heather Hughes on September 27, 2019 | Comments: one comment
Related : Soap Opera, Spoiler, Television, The Bold and the Beautiful 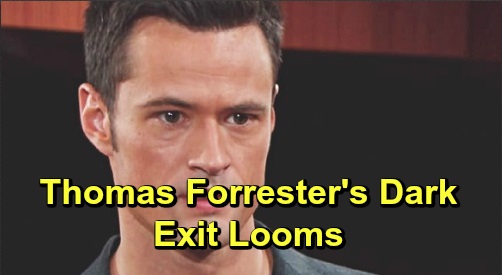 The Bold and the Beautiful (B&B) spoilers reveal that the CBS soap’s plans for Thomas Forrester (Matthew Atkinson) finally seem clear. At one point before his cliff fall, Thomas seemingly had an epiphany. He got choked up as he realized how hard he’d been on Douglas Forrester (Henry Joseph Samiri). It led many fans to believe Thomas would be redeemed.

B&B also had Thomas go though that terrible hospital ordeal, which is usually another tell-tale sign of redemption. Anytime a show makes a character suffer like that, it tends to be a sign that things are turning around. Thomas even had moments with Hope Logan (Annika Noelle), Ridge Forrester (Thorsten Kaye) and Steffy Forrester (Jacqueline MacInnes Wood) where he seemed to be genuinely remorseful about the things he’s done.

However, Thomas’ recent visit to see Douglas made it obvious that he hasn’t really changed. He’s still the same manipulative monster he was before. Douglas is just a sweet little kid who told the truth. He shouldn’t be berated for “tattling” or blamed for the destruction of Thomas and Hope’s marriage. This is emotional abuse, so the continued concerns about Thomas are definitely warranted.

No matter how you feel about Brooke Forrester’s (Katherine Kelly Lang) stance or even Ridge’s defense of Thomas, Douglas is who’s important here. It’s sad that his father repeatedly subjects him to this twisted guilt-tripping. Douglas reunited Beth Spencer (River Davidson and Madeline Valdez) with her rightful parents, but Thomas insisted his son was no hero. All he wanted to do was rant about Douglas defying him.

This isn’t the behavior of someone who’s a viable love interest or a character that fans can root for. Thomas is once again being written as a villain. The Bold and the Beautiful had their chance to redeem Thomas and passed it up. What does this mean for Thomas future? It could mean Thomas still has a dark exit ahead of him. Death, prison or a mental hospital stint are the most likely options.

Thomas has done nothing to show he’s interested in changing for the better. He’ll be sabotaging the Logans and his own father’s marriage soon, so that’s just further proof B&B doesn’t want Thomas to be a good guy. Unfortunately, Thomas isn’t a baddie with a soft side like Bill Spencer (Don Diamont) – who adores young Will Spencer (Finnegan George) and takes good care of him. Bill’s proven he wants to be a solid family man now.

Since Thomas isn’t going down redemption road after all, do you think he’s on his way out eventually? Will Thomas get a dark exit to match his dark personality? The Bold and the Beautiful spoilers say the excitement’s about to rev up, so stay tuned. We’ll give you updates as other B&B news comes in. Stick with the CBS soap and don’t forget to check CDL often for the latest Bold and the Beautiful spoilers, updates and news.