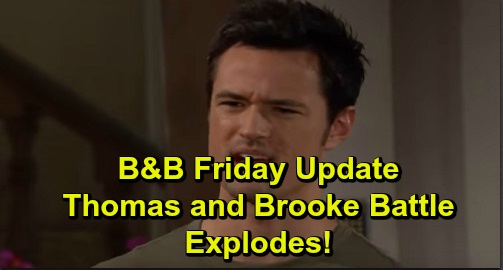 The Bold and the Beautiful (B&B) spoilers update for Friday, September 27, teases that Brooke Forrester (Katherine Kelly Lang) will be ready to rumble! She’ll have an epic battle with Thomas Forrester (Matthew Atkinson), so be prepared for things to get ugly. They’ll take some serious jabs at each other after Brooke returns and releases all the rage she’s been feeling.

Brooke will have a huge problem with Thomas being around Douglas Forrester (Henry Joseph Samiri). He won’t think she has any right to prevent him from seeing his son, but Brooke will insist the boy’s well-being comes first. They’ll argue about whether Thomas poses a threat and get into some other issues, too – like how Thomas treated Hope Logan (Annika Noelle) and his silence in the baby swap circle.

Of course, Thomas will inevitably bring up Brooke’s shove, which sent him hurling off a cliff. He may suggest that Brooke probably wishes he’d just died from his injuries. This B&B war will keep escalating until Brooke tells Thomas to get out. She won’t want his toxic presence there, but he’ll think Brooke and the rest of the Logans are the toxic ones. That’ll give Thomas a risky idea soon enough.

The Bold and the Beautiful spoilers say Thomas will want to eliminate all Logan influence from the Forrester clan. He’ll want Brooke’s family away from his own, so he’ll take steps to make it happen starting next week. In the meantime, Vincent “Vinny” Walker (Joe LoCicero) will score info that could help with his pal’s mission. Vinny will head to Bikini Bar and learn quite a shocker while he drinks.

It looks like Danny (Keith Carlos) will let it slip that Ridge Forrester (Thorsten Kaye) spent the night with Shauna Fulton (Denise Richards). Danny doesn’t know the details of that night, but the fact that they were together at all could do major damage. Vinny will file the secret away and give it to Thomas when the moment’s right.

Over with Ridge, he’ll have a decision to make. Thomas expects his dad’s loyalty, but Ridge can’t give it without causing more conflict with Brooke. He won’t know what to do, but Shauna will be there to lean on. She’ll happily support Ridge through this crisis and hope it brings them closer.

The Bold and the Beautiful spoilers say Ridge will indeed appreciate having Shauna to confide in. Their relationship is already getting dangerous, so it’ll be interesting to see where this leads. We’ll give you updates as other B&B news comes in. Stay tuned to the CBS soap and don’t forget to check CDL often for the latest Bold and the Beautiful spoilers, updates and news.