BY Heather Hughes on September 26, 2019 | Comments: one comment
Related : Soap Opera, Spoiler, Television, The Bold and the Beautiful 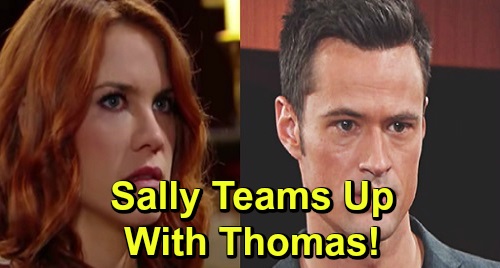 The Bold and the Beautiful (B&B) spoilers tease that Wyatt Spencer’s (Darin Brooks) reunion with Sally Spectra (Courtney Hope) may be short-lived. It’s clear that Wyatt has some unresolved feelings for Florence “Flo” Fulton (Katrina Bowden) – no matter how much he wants to bury them under the surface. Even Wyatt’s recent proposal seems like a way to convince himself he’s ready to move on.

Wyatt should’ve taken a step back and tried to process everything. Instead, Wyatt wanted to jump right back in with Sally. She had concerns about facing more heartbreak, so she really should’ve trusted her instincts. The Bold and the Beautiful spoilers hint that trouble is indeed brewing for “Wally,” so Sally could face another round of devastation.

Since Katie Logan (Heather Tom) needs a kidney transplant and Flo needs redemption, it makes sense for B&B to use Flo as the kidney donor. She helped steal a baby, so it’s fitting that she gives up on organ. That won’t undo the pain Flo caused with her lies, but at least she could save a life. Coming through for Katie would mean so much to the Logans and Bill Spencer (Don Diamont).

Of course, it would also mean a lot to Wyatt. He cares about Katie since she’s his ex and soon-to-be stepmother again. Katie is also Will Spencer’s (Finnegan George) mom and Bill’s current love. There are plenty of reasons for Wyatt to be unbelievably grateful to Flo if she donates a kidney. It could be just the grand gesture she needs to win Wyatt over.

Where does that leave Sally? Broken and bitter probably! If Wyatt dumps Sally for Flo once more, we could see a more manipulative Sally take over. What will she have to lose at that point? Sally won’t have anyone to impress or appease. She may become a bit of a bad girl and focus on vengeance.

Naturally, Thomas Forrester (Matthew Atkinson) would make the perfect partner in crime. B&B fans can expect Thomas to make major trouble for the Logans in the coming weeks. Will Sally ultimately join that fight? Sally might want to target Flo and all the supporters who just welcomed her back with open arms. She may not agree that donating a kidney should wipe the slate clean.

Sally will likely want revenge on Wyatt for his betrayal, too. She might team up with Thomas due to their mutual goal and perhaps fall for him again in the process. Thomas hurt Sally as well, but a reunion could still happen. They’ll both need love interests since Wyatt seems destined for Flo and Hope Logan (Annika Noelle) is sticking with Liam Spencer (Scott Clifton) for now.

Will vengeful Sally take center stage down the road? Could that lead to reuniting with Thomas and helping him push his ruthless agenda? The Bold and the Beautiful spoilers say some hot drama’s brewing, so stay tuned. We’ll give you updates as other B&B news comes in. Stick with the CBS soap and don’t forget to check CDL often for the latest Bold and the Beautiful spoilers, updates and news.