Days of Our Lives Spoilers: Kristen Kidnaps Ted to Silence Him – Fears Holly Secret Will Explode, Ted Must Disappear 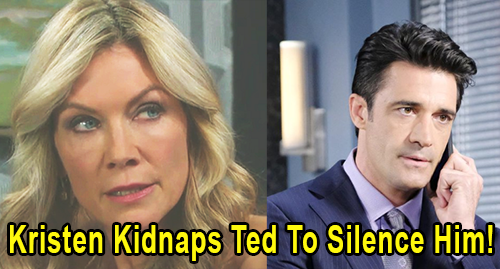 Days of Our Lives (DOOL) spoilers tease that Ted Laurent (Gilles Marini) will make a risky decision. DOOL fans know he helped Xander Cook (Paul Telfer) fake Holly Jonas’ (Harlow and Scarlett Mallory) death, but he wasn’t happy about it. Xander warned Ted to keep his mouth shut, but Ted will still feel the need to fix this somehow.

Of course, Ted want won’t to do anything that might jeopardize his new romance with Hope Brady (Kristian Alfonso). That’s why he’ll really think this through before he does something he might regret. Ted won’t want to destroy his opportunity with Hope, so he’ll have to be incredibly careful about how he exposes the truth.

Unfortunately, no amount of planning could prepare Ted for what he’s about to walk into. He has no idea who the third partner in the kidnapping scheme was. However, Days viewers know it was Kristen DiMera (Stacy Haiduk), who’s currently playing the part of grieving mom. Kristen’s pretending to be Nicole Walker (Arianne Zucker), and it’s working out pretty well thanks to that realistic face mask.

Days Of Our Lives Spoilers – Could Holly Still Be Alive?

During the week of June 10-14, Days of Our Lives spoilers say Ted will decide to play the hero. He’ll think he can earn Hope’s approval and put this mess behind him once and for all. Ted will start by going to “Nicole” and making a surprising admission.

He’ll reveal a huge secret, so he may hint that Holly could still be alive. Ted might find a way to spin this and blame it on Xander – all while keeping his own name out of it.

Ted could allude to a secret partner he’s heard about, too. He may act like this is brand-new information he’s discovered through digging or eavesdropping. The problem is Ted won’t really be talking to Nicole! He’ll be looking Kristen right in the eye and betraying her, but he won’t even realize it.

Days Of Our Lives Spoilers – Ted Laurent Will Disappear

There’s a good chance Kristen’s response will be swift and fierce. She doesn’t mess around, especially not when so much is on the line. Kristen isn’t about to let Ted or anyone else stand in the way of her happiness. She believes she’s got a real shot with Brady Black (Eric Martsolf) through this plot, so she’s determined to keep up the ruse. If Ted runs his mouth to anyone else, there could be trouble.

Days of Our Lives spoilers say Ted will disappear in the near future. It certainly sounds like Kristen will kidnap Ted – or at least order someone to do it for her – in hopes of keeping him quiet. She’ll get this nuisance out of the picture so she can continue her sneaky plan in peace.

That’s probably the right call since Kristen won’t want Ted to blab, but his vanishing act will still raise questions. You can bet Hope will search for the truth, which could mean more drama for Kristen! We’ll give you updates as other Days news comes in. Stay tuned to DOOL and don’t forget to check CDL often for the latest Days of Our Lives spoilers, updates and news.