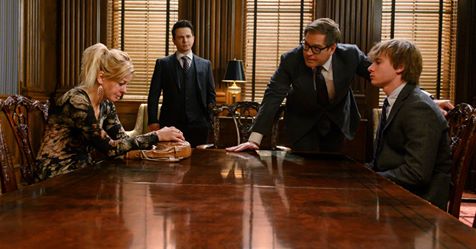 Tonight on CBS their drama Bull inspired by Dr. Phil McGraw airs with an all-new Monday, March 18, 2019, episode and we have your Bull recap below.  On tonight’s Bull season 3 episode 17 called, “Parental Guidance,”  as per the CBS synopsis, “Bull and the TAC team represent a teen boy raised in complete isolation when the young man goes on trial for murder after engaging in a deadly shootout.

As the trial gets underway, Bull looks to select jurors who believe his sheltered client acted under the misguided influence of the only other person he has ever known, his survivalist father.”

A teenager needed Bull’s help. Lucas Schwieger was sixteen. He grew up in a shack with no electricity or running water and he never so much has been to school. Lucas was raised by a single father who identified himself as a radical survivalist and unfortunately, the man convinced the son to open fire when a social worker came to their home with the state police. There had been one injured officer and both social worker as well as the father had been killed in the crossfire, but the state still wanted to charge Lucas for the murder and attempted murder of one of their own. The outside world didn’t see Lucas as the abused child he was and instead viewed him as a young man responsible for the carnage on his family’s property. And that’s why they wanted to charge him as an adult.

Lucas was looking at a life sentence over something he doesn’t understand. He’s unable to read, doesn’t know what lawyers, and basically could not speak in his own defense. Lucas is ignorant of the law and it was this ignorance that made him give a confession. He confessed fully to the part he played. He thought that it would mean he could go back home again and that wasn’t possible. Lucas first goes through a trial and somehow his legal team had to prove to the world that Lucas was brainwashed. He was in a cult of two with his father making all the decisions. Norman Schwieger was a paranoid and delusional man who thought the world was bound to end and that if he didn’t rely on the necessities then he would be prepared when the end inevitably comes.

Again, Norman was mentally ill. He had delusions and he passed that it on to a child who was never allowed to decide for himself. Lucas was programmed to hate. He never thought he would need others or have to follow anyone else’s orders and that’s why representing him was so tricky. His legal team had with Bull’s help looked for people who were used to following orders and would be more sympathetic to Lucas’s cause. Lucas was going to be pictured as a kid led down the wrong path and so the first thing that was down after jury selection was the motion to suppress the confession. Benny told the judge how Lucas didn’t know what his rights were much less understand them enough to speak in his own defense and he also alluded to Norman’s mental illness. He was using that to justify what had happened and it was working with everyone besides Lucas.

Lucas had several outbursts in court. He shouted about how his father taught him to shoot and fish, but that they killed his father after they came on his land. Lucas still didn’t see what was wrong with his childhood and so he had needed to be escorted out of the courtroom. He sort of proved the point Benny was making with his outburst and the judge allowed the confession to be suppressed, but then Lucas tried to kill himself. He tried to hang himself in his jail cell and was found by the guards. Lucas was rushed to the hospital and he was going to need time to heal. It was simply unfortunate that the prosecution wanted to use his suicide attempt against him. The prosecution wanted to say the suicide attempt was an admission of guilt on Lucas’s part and it wasn’t. He was just depressed. He watched his father die in front of him and was torn from his only home. It’s a wonder Lucas functions at all.

The judge listened to both sides and she didn’t believe the jury needed to know about the suicide attempt. It had no bearings on the case. Lucas needed time to heal and once he was ready he was allowed back into the courtroom so the trial could progress. The prosecution had later called Yvonne Fowler to the stand. She was the one that made the call to social services and it turns out she knew Lucas. Lucas and his father had come into the hospital one day because Norman had walking pneumonia. He had needed to be hospitalized and there was no place for Lucas to go. So Yvonne as a nurse took pity on him. She invited him back to her place to stay with her and her family and he was with them for three weeks. Lucas got to meet other people, he went to church, and he learned all ten commandments. Like thou shalt not kill. And therefore Lucas knew what he was doing was wrong.

This turned most of the jury against Lucas, but Danny had found out that his mother was alive and living in the city. Lucas was told that she had hung herself when he was a baby and so he didn’t know different until he was introduced to her. Mrs. Schwieger was a drug addict that left her husband after he put a gun in her mouth and threaten to kill her if she tried to take Lucas with her. She ran away after that and never looked back. Mrs. Schwieger testified on Lucas’s behalf and she said it like it was. She told horror stories about what Norman would do and how it got worse over time. It had started to turn the jury. They began to sympathize with Lucas because he never had a choice in any of this. He was raised by a delusional paranoid and the only time he had a chance at normalcy was with Yvonne.

It was why his defense put Lucas on the stand. He testified how he practiced shooting targets a hundred yards away every day since he was old enough to pick up a gun and yet he only shot the state trooper. It seems he did learn thou shalt not kill after all and that was thanks into Fowlers, so Bull later came to an agreement with the ADA. They agreed that Lucas had to go to therapy and that he could live on probation. They also asked the Fowlers if Lucas could live with them and they agreed. They loved Lucas and will finally allow him to be a child for the first time in his life.