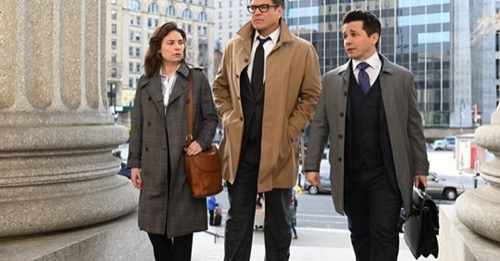 Tonight on CBS their drama Bull inspired by Dr. Phil McGraw airs with an all-new Monday, May 13, 2019, episode and we have your Bull recap below.  On tonight’s Bull season 3 episode 22 called, “Pillar of Salt,” as per the CBS synopsis, “Bull works to convince a jury that an alleged murder was actually a tragic accident when TAC represents a woman charged with her 3-year-old stepdaughter’s death.

A woman rushes her step-daughter into the ER. After they discover the little girl Lizzie has bruising, they pull the step-mom from the room and question her. A short time later Lizzie dies.

On the way to work Bull and Benny talk about the Step Monster from SoHo in the headlines. Benny is in a terrible mood. He had a bad weekend. His sister, Bull’s ex-wife, is getting direct again. They meet with Lizzie’s father. He tells them how much he loved his daughter and how much Angela, his wife, loved Lizzie. He cannot explain how Lizzie died of a salt overdose. They take the case.

Benny and Bull meet with Angela. They ask her about salt. She doesn’t have a real answer. They get her out on $5 million bails.

Bull calls Izzy and leaves a message. They head into court where the prosecution calls on a witness, a teacher from a class Angela brought both the kids too. The teacher details one terrible day where Angela made a comment that she could have left Lizzie in the cab she was being so bad. Taylor sends Benny some ammo in the form of a social media post the teacher made herself. Benny points out that we all say things we don’t mean when we are tired and upset.

Marisa meets with her OBGYN about her frozen eggs. She goes alone. Her husband’s test was problematic.

Benny shares that Izzy’s husband cheated on her. Bull talks about how hard marriage is.

Lizzie’s biological mother takes the stand. She shares that her daughter told her Angela punished her with red pepper flakes in her mouth. Benny gets up for his cross-examination and asks her about how she feels about Angela, what she knows of her and how Lizzie’s doctor offered red pepper flakes as a way to get stop the young girl from eating lip balm. Lizzie’s biological mother begins to cry. She didn’t know this.

Back at the office, Benny asks to speak to Bull alone. Turns out Izzy cheated on her husband and with Bull. Benny is beyond angry. Bull took advantage of her and has no regard for the sanctity of marriage. The two get into a physical altercation in front of the others. Benny is done with him. Once this case is over he is leaving.

Marissa helps Bull who is on the ground with a bloody lip. The next morning, Marissa comes in to find Bull passed out in his office. There is an empty alcohol bottle on the table. When Bull wakes she tells them Benny is working at home and that they have asked for a one-day continuance.

At court the next day they bring in a specialist. It appears that Lizzie may have suffered from what is called Pica, a disease where someone eats things like ashes, salt, dirt and more. In order to sell it to the jury, they need someone to take the stand and share witness testimony that Lizzie actually ate weird things.

Bull pays a visit to Lizzie’s biological mother who admits she saw noticed something wrong with Lizzie after Angela pointed it out. She agrees to take the stand. She admits she saw her daughter eat chalk at the park.

They wait for the jury to come back. Meanwhile, Marissa has to tell her husband that he poses a problem for them having a baby. Instead, she tells him she changed her mind to avoid hurting him.

The jury reaches a verdict – Angela is found not guilty. She hugs Bull, Benny, her husband and then Lizzie’s biological mother.

Bull comes out of the court and inside his car to see Izzy. They talk about her divorce. She’s fine and Benny will be too. She is pregnant and it’s Bull’s. He is thrilled!!