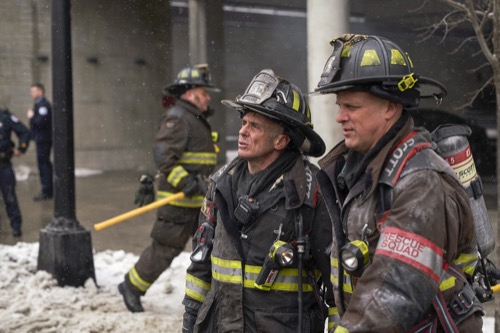 Tonight on NBC Chicago Fire returns with an all-new Wednesday, February 13, 2019, season 7 episode 15 called, “What I Saw” and we have your Chicago Fire weekly recap below. On tonight’s Chicago Fire as per the NBC synopsis, “In the first part of a crossover with “Chicago P.D.,” a spate of robberies comes to light after a firehouse lockbox key goes missing. CPD’s Voight has suspicions that a firefighter may be involved, and with Boden’s support he recruits Cruz to go undercover and help sniff out any suspicious activity.”

Tonight’s Chicago Fire season 7 episode 15 looks like it is going to be great and you won’t want to miss it.   While you’re waiting for our recap make sure to check out all our Chicago Fire recaps, news, spoilers & more, right here!

The station responded to a fire at an apartment building. They were told that they didn’t have to break down any doors because there was a lockbox in full view, but Casey went to the lockbox and found it empty. There had been no keys inside. He and his men had had to break down the door to make it into one of those apartments and luckily they were able to save a man that was trapped inside. It just would have been easier if they had access to those keys. They talked to other fire trucks in the are and it turns out that particular lockbox had been checked a few days ago. There was no reason why it would be empty now and so the firefighters reported the incident to the police.

Only somehow Sgt. Voight found out about it. He and his crew in Intelligence have been looking into a string of robberies. They didn’t know how the thieves kept getting in until they heard about the lockbox and it seemed to fit with the guys they were looking for. The police later checked the scene of all the robberies and each and every building that had been hit had a lockbox. The keys were taken out for the robberies and then returned once the thieves were finished, but Voight believes something happened during this latest robbery. Maybe the thieves ran out of time or maybe they were flustered when the guy that owns the apartment came home. Either way, the thieves started a fire to create a distraction and never returned the keys.

Voight approached Chief Boden and the commissioner with what he knew as well as what he suspected. It seems he knew that the lockboxes were the key (no pun intended) to the whole case and that someone was accessing the lockboxes illegally, but he suspected that the perp responsible for picking the buildings to hit was a firefighter. Firefighters were the only ones that knew which buildings have lockboxes and so it must be someone on inside either passing on the information if not outright stealing the keys themselves. Voight needed a firefighter that could be trusted to take an undercover mission and he wanted Cruz. Cruz and Voight have worked together before and so Voight knows he could trust Cruz even though Cruz hates him.

Cruz hated Voight because of what happened to his brother was a raw deal with the police, but the man also didn’t want a dirty firefighter to get away with their crimes. He volunteered to work with the police and his bosses covered for him. They claimed that Cruz being transferred temporarily because he left gear behind at the scene. The transfer wasn’t going to be permanent and so Firehouse 51 knew that they were going get Cruz back. Plus, everyone at the station had been warned not to ask questions because Cruz made a mistake and needed to be properly disciplined. So Cruz had the perfect story to explain why he was going to another firehouse and he didn’t even have to talk about it with his friends because they would all naturally feel bad for him.

Cruz went to a one-engine firehouse. It was a small crew there and so Cruz got to know everyone right from the start. The others had been friendly with him and there had been one person that stood out. A firefighter by the name of Kehoe has an expensive sports car and there was no way a firefighter could afford that car with just his salary. Cruz made sure not to seem like he was prying when he asked how the guy was able to afford it, but it turns out that Kehoe comes from family money. His family ran a dairy farm until they sold it and so Kehoe didn’t need to work. He did the job because he loved it and so Cruz had to write off his first suspect. He thought he could have been wrong about a dirty firefighter and then he learned that the lieutenant had been acting off.

Cruz was told the lieutenant has become short-tempered these last past few weeks. The whole crew noticed it and they didn’t why their friend turned into a grouch, but even Cruz got yelled at. He was overheard asking about the car and was yelled at for being more IRS than a firefighter. It didn’t make any sense. So Cruz followed the lieutenant and he learned why the guy was acting off. The poor sod had found out his wife’s cancer was back and that was more aggressive this time around. The lieutenant thought he could lose his wife any minute and that’s why he doesn’t have time for anyone else. And so Cruz later reported that everyone checked out because he had seen nothing suspicious.

Cruz didn’t even consider one of them because there was one guy that wasn’t on the call with the latest fire, but as Cruz soon learn that was the guy he should have been suspicious of from the start.

The key to the lockboxes was removed and handed off all while Cruz was recording with his cell phone.