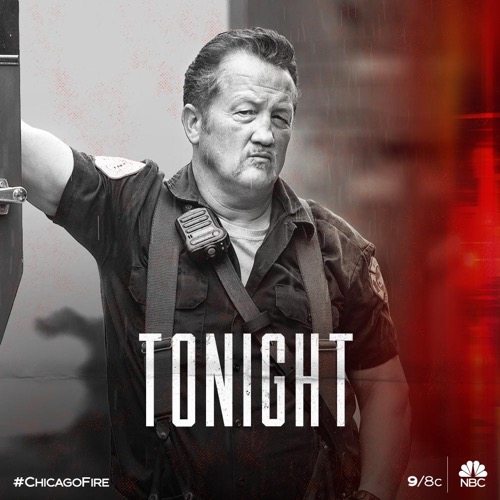 Tonight on NBC Chicago Fire returns with an all-new Wednesday, October 23, 2019, season 8 episode 5 called, “Buckle Up,” and we have your Chicago Fire recap below. On tonight’s Chicago Fire season 8 episode 5 as per the NBC synopsis, “Kidd must prove herself at the National Firefighter Leadership Conference while the rest of Firehouse 51 is called to two eerily similar car wrecks. Mouch tries to keep everyone in the firehouse informed by starting a newsletter, but things quickly get out of hand. Cruz deals with heartbreak.”

Tonight’s Chicago Fire season 8 episode 5 looks like it is going to be great and you won’t want to miss it.   While you’re waiting for our recap make sure to check out all our Chicago Fire recaps, news, spoilers & more, right here!

Kidd is all packed to go to the Leadership conference, she is nervous, Severide is there to see her off; he tells her that she’s got this and kisses her goodbye.

Mouch asks Brett if Cruz popped the question, she says not that she knows. They Mouch sees Cruz and asks him directly if he proposed to Chloe, he says not yet.

Mouch created a newsletter to keep everyone in the station, in the know. He says he did it for team unity. The alarm goes off, there is a thee vehicle accident. The passenger, a girl, had her feet on the dashboard and she is trapped in a convertible. The car is trapped under a mini-van but thankfully there is a two truck on site to move the convertible. The girl in the first vehicle, Nicole, swears its not her fault. A guy in front of her slammed on the break and she had no choice but to do the same, but he took off after the accident. They use the jaws of life to get the girl out, she is badly hurt. The two truck driver asks Severide if he gets a bonus for helping, seriously!

Kidd arrives at the Leadership conference, she sees another woman and says that she is surprised to see another woman, there all men. The woman says she didn’t know another female officer was attending, Kitt admits she is not an officer and the woman then snubs her.

Hermann son and wife are in the station with him, they say hi to Brett.

Brett tells Mouch that she has been thinking about the newsletter, it is lacking and there is so much more that they can do with it. It doesn’t have to be fancy, it just needs interesting content.

Captain Casey sees someone wandering in the station and asks him if he is looking for something, his name is Rick Ferguson from the safety committee. Rick wants to know who enlisted the two truck driver to help, Mouch says he did, Rick says that private two truck drivers are not indemnified by the city and Mouch caused liability issues. If the two truck or the driver were hurt, it would have caused huge lawsuits against the city. Rick tells Casey it better not happen again, and he better let someone else make the decisions next time because ultimately, he is responsible for their actions.

At the conference, Kidd is given heck for not having her gloves on and is told to carry a heavy hose upstairs as punishment.

Hermann, Kidd, and others are trying to plan the newsletter. Cruz walks by, Brett looks at him and he tells her that Chloe broke up with him, that is why he hasn’t said anything. He goes on to say he didn’t want to make a big thing of it, breakups happen, Brett says she is sorry and it doesn’t make sense, the way the two of them are together. Cruz says she didn’t give him a reason, but she knew he was going to propose so maybe she didn’t want to marry him.

Kidd calls Severide and tells him that she hasn’t climbed this many stairs since the academy, but it’s all good and she thinks she had the fastest time. She tells him that she was ready to go, but she now thinks she doesn’t fit in; one guy got a medal of valor and another is a former navy seal. The alarm goes off, Severide has to go, but first, he tells Kidd that she’s got this.

It’s another accident, Severide is on the scene and sees a two truck driver taking one of the vehicles away, Severide tries to stop him, but no luck. There is a mini-van, an older man is trapped inside. There is also a car, a man is trapped in there as well. It takes the jaws of life to help the man out of the minivan. Severide tells Casey that the tow truck driver was the same as the one at the scene of the accident in the morning, and it was the same type of accident.

Back at the conference, a building is on fire, and the commander asks the participants one by one how they should enter the building to try and save a child who is trapped in there. Everyone answers wrong, except for Kidd. She tells him that the temperature is too hot in there because of the type of fire and at this point, it is not a rescue, but a recovery. The commander is happy that he finally got the right answer.

Mouch goes to the hospital, he wants to see the girl who got hurt in the convertible. He sees her friend and he tells him that she is doing great and is going to get released from the hospital. Had they not got her out when they did, she could have been in worse condition.

Brett meets with Chloe and asks her what happened. She says Cruz was the man of her dreams, but she can’t be with a firefighter. She can’t wonder every day if he is going to come home. She says it is being with Otis’ family that did it for her, she can’t do that. Brett says that Cruz Is one in a billion and letting him go would be crazy.

Severide is off duty, he finds the two truck that took the card and takes pictures. A guy walks up to him and says he better be more careful, and what the heck is he up to, and he better watch himself. Severide continues to snap pictures.

Hermann’s son calls him, he is at a pool party and someone is not breathing. Hermann tells him to hang up and call 911. Hermann rushes there fast and tries to revive the kid. The children are watching and look scared. Foster assists Hermann, the boy’s name is Jason, he fell from the roof, about 10 feet. Hermann is upset, he tells him that you don’t stand on the side and let a friend do something dumb like jumping off a room. His son tries to explain himself, but Hermann won’t have it.

Severide shows Wallace the photos that he took. Casey finds out the lead car in both accidents was a grey sedan. Severide goes to the hospital to see the guy who was in the grey sedan, he tries to talk to him and then the tow truck driver walks in. Severide doesn’t stop, he puts photos in front of the guy to show him all the people who got hurt.

Kidd has another task at the conference and she is nominated to be the leader by the same woman who snubbed her in the beginning.

Severide calls PD and has given them a tip about the tow truck driver, they arrest him and his partner.

Wallace finds out about the newsletter, he says no more.

Kidd is back, Severide is there to welcome her home. She says things got much better, she never had a doubt.

Hermann goes home, his son says he was right, he should have stopped the guy from jumping and he is sorry to have let him down.

Chloe goes to see Cruz, he says he doesn’t know what he did wrong. She says he did nothing wrong, and baking really calms her down. She bakes cake pops, he bends down on one knee and asks her to marry him. She says yes.