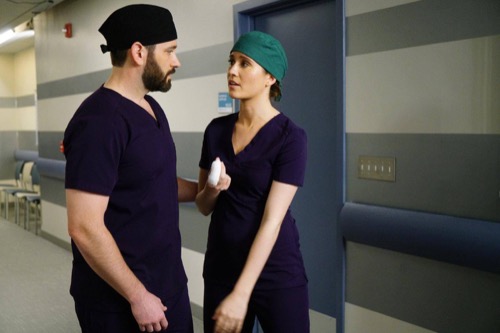 Tonight on NBC their medical drama Chicago Med airs with an all-new Wednesday, February 6, 2019, episode and we have your Chicago Med recap below. On tonight’s Chicago Med season 4 episode 13 called, “Ghosts in the Attic,” as per the NBC synopsis, “Dr. Halstead withholds some important information from Dr. Manning and she begins to question his suspect behavior. Dr. Choi comes to some difficult conclusions involving April over a patient’s care. An incident in the OR involving Dr. Bekker at the hands of Dr. Rhodes may have serious implications.”

Halstead and Manning were back together. She let him move back in and she even believed there were no more secrets between them, but there had been one thing Halstead held back. He told Manning that he wouldn’t bring the gun in the house and he didn’t. Halstead had left the gun in his car where he assumed it would be safe and that’s why what happened took him by surprise. Someone broke into his car. It was only his car targeted in the parking lot and it happened no more than ten minutes from when he parked. Halstead rushed to his vehicle when he was alerted by security and he searched his car for the gun. He looked everywhere and saw no signs of it while the alleged thieves had somehow left behind his laptop that was on the backseat.

Halstead knew it couldn’t have been a coincidence that some “kids” broke into his car and found his gun, but left behind his laptop. He suspected that someone might have followed him and learned his patterns. Only he didn’t want to tell Manning what happened with the gun and so he covered the whole thing up. He claimed nothing was stolen from his car and Manning believed him because she couldn’t think of a reason why he would lie about something like that. Nevermind that it was Manning’s faith in him that he allowed him to get away with all those lies months ago and so once again Halstead’s secrets were worsening his problems. He let Manning take the first case offered and was panicking quietly by himself when Charles came to see him.

Charles found out Halstead has been missing his last few appointments with his therapist. The therapy wasn’t optional. Goodwin ordered it and she told Halstead that he wouldn’t be allowed to continue working without getting cleared by the therapist. Now, Charles had stayed on top of this case because he considered Halstead a friend and so he didn’t appreciate having Halstead almost bite his head off. He warned Halstead what would happen if he didn’t follow the rules and only then did his fellow doctor begrudgingly agreed to make another appointment for the ones he missed. It got Charles off his back and Halstead went back to worrying. He made several calls he didn’t tell Manning about and she saw him frantically on the phone.

Manning didn’t go over to say anything because she was still treating a patient, but she was beginning to notice signs with the man she was treating. His name was Gerard and he said he didn’t feel well. Manning didn’t think it was anything serious until Gerard’s girlfriend Lucy canceled her flight to Arizona and came to check on him. She wanted to know if Gerard was feeling ill because of the last chemo treatment and so that had thrown Manning because her patient never mentioned that he was recovering from cancer. She asked to see his chemo port and he claimed he didn’t have one because he had good veins. He also didn’t want to go through a full checkup which didn’t make sense because as a cancer survivor the doctors needed to take every precaution to ensure it doesn’t come back.

Then there was Choi and his patient. His patient Mr. Kaminsky had seemed like a nice elderly man who was experiencing hypertension and so Choi tried to get a nurse to help, but for some reason, they were all doing their best not to help Kaminsky. Choi couldn’t figure out what was happening and he confronted the youngest nurse because he knew Monique would tell him the truth. And she did. Monique said the nurses didn’t want to help Kaminksy because he was a child molester. He molested their fellow nurse Hank when Hank was a kid and he had tried going to the cops except the judges threw out the case against Kaminsky. So the piano teacher was never registered as a sex offender and he still carries out lessons to little kids.

Once Choi was told the truth, he felt for Hank and would never have forced the nurse to continue Kaminsky’s care. It was the other nurses that Choi had a problem with. He said that there were supposed to treat everyone fairly and provide care. The others just didn’t agree with him. They waited to draw Kaminsky’s blood and one of them might have given the man a hot dose because Kaminsky later died in his room. He hadn’t shown any markers or symptoms for the condition that led to his death and so Choi suspected that the man had been killed. He even believes that the nurses could have all been involved to avenge Hank and so he asked April to meet him on the roof because he wanted her word that she hadn’t planned this.

April was the last person seen entering the room before the patient crashed and so Choi asked her what she was doing. She said that she had given the patient water because he said he was thirsty and that’s it. She didn’t like the insinuation that she did something to Kaminsky and she became angry with Choi. He knows her and so he should know better than to suspect her. April walked away without giving Choi the answers he needed and he had to go looking for answers elsewhere. Meanwhile, Manning came to the conclusion that there was something wrong with her patient. She believed he was faking his cancer as well as his symptoms in order to manipulate his girlfriend Lucy. Lucy would have planned for work and that’s when he would have a seizure.

Lucy has now lost her second job in two years because she kept having to cancel things to be there for her boyfriend and so she didn’t suspect a thing. She even said her boyfriend was sweet for not wanting her to be there for his chemotherapy because he didn’t want to worry her. Only that had concerned Manning. She thought Gerard was faking his disease and so she tested some pills she found in his bag. It turns out the pills were vitamins. Gerard was taking them to feel better because his real secret is that his cancer is worse off than he told Lucy. Lucy thought he was over the chemo and so she didn’t know that he had a Stage 3 tumor in his colon or that Manning violated his privacy because of a suspicion.

Manning was lucky not to get into any trouble for what she did and she later talked about it with Charles. Charles believed her mindset was prone to the suspicious and she couldn’t tell him that she was because deep down she did suspect that Halstead was still keeping secrets from her. Halstead didn’t know of her suspicion because he had been helping out a friend of Maggie’s and so he had finally come out of his bad mood to remember to be a good doctor. He was also planning on going home with Manning when she finally confronted him by asking what was stolen from his car. And so that’s when he told her it was his gun.

Manning had had enough with all the lies and she gave Halstead back the ring because she could never trust him again.

Elsewhere, Choi performed an off the books autopsy and he proved that his patient died from natural causes. He also tried to make it up to April but she didn’t want anything to do with him because a friend wouldn’t have thought she could kill a patient.

As for Rhodes, he was just about to forgive Bekker when he realized she might have deliberately caused bodily harm to herself in order to win over his sympathy. So he was in no rush to forgive.