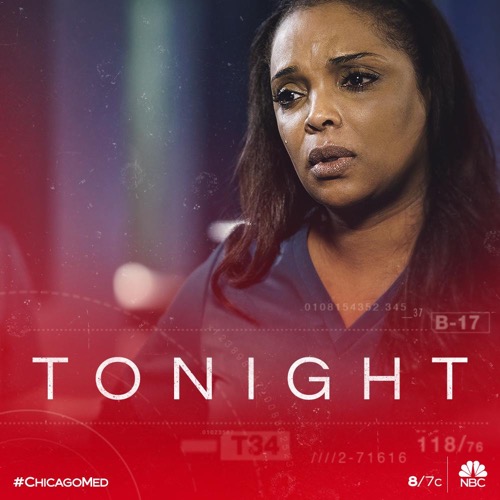 Tonight on NBC their medical drama Chicago Med airs with an all-new Wednesday, February 13, 2019, episode and we have your Chicago Med recap below. On tonight’s Chicago Med season 4 episode 14 called, “Can’t Unring that Bell,” as per the NBC synopsis, “Will’s personal issues continue to interfere with his relationship with Natalie and his life at the hospital. Dr. Bekker tries to mend things with Dr. Rhodes. Goodwin questions Maggie’s life-threatening decision and Dr. Charles tries to lend a hand to the daughter of a new friend.”

A teenager came in with a gunshot wound. He had been working the front of his family’s store when a guy with a gun came in and shot the kid during a robbery. The shooter was soon caught and the police even recovered the gun, but the gun didn’t belong to the thief. It belonged to Halstead. Halstead was told about the connection from his brother and he naturally felt guilty. It had been his gun and it had cost him everything. He lost his relationship with Dr. Manning because he had gotten the gun and he also lost any chance of gaining back her respect when he lied about the gun being stolen. Halstead went out of his way to gain a gun in the first place because he thought it would keep him safe and the fact it has to lead to nothing but problems was weighing on him.

The teenager Gabriel Park was being treated by Dr. Rhodes. Rhodes stemmed the bleeding and he was doing his best to support his patient as wall the patient’s very concerned parents. Only once he stabilized Gabriel, he decided to go talk to Bekker. Bekker had accidentally stabbed herself when she was treating an HIV patient and Rhodes had been desperate to be at her side during her time of need. It wasn’t until later that he thought about how Bekker was usually very careful and an accident didn’t sound like her. He did wonder for a moment if she might have brought on the accident on purpose because she wanted him to forgive her and once he got over this he remembered he needed to support her.

Bekker had “understood” when he said he was out of reach for a while there and the two of them were talking when they informed about the hospital’s CEO that someone has made a complaint. The complaint against Rhodes said that he took risks with a previous gunshot victim and that he was to blame for why the patient died. The whole matter needed to thoroughly investigated and if the board found any credible evidence to back up this complaint then it could mean Rhodes’s medical license. Rhodes didn’t know who issued this complaint because it had been made anonymously, but he felt like people were questioning his abilities as a doctor and so he really didn’t need for Halstead to step in with his patient.

Gabriel only had feeling in one leg and so everyone thought it best to leave in the bullet rather than risk Gabriel becoming a paraplegic, but Halstead went behind everyone’s back to talk to the family and he convinced them to risk surgery. He kept going on and on about how Gabriel could be made whole again that he failed to take in the repercussions. Rhodes had been furious when he found out what Halstead did and so he confronted his fellow doctor. He told him that he could sympathize with Halstead blaming himself because it had been his gun and so he drew the line at getting his patient to experience a risky procedure all in the name of making Halstead feel better. Halstead didn’t see it that way and so he rushed back to his actual patient because he couldn’t face Rhodes’s questions.

Halstead was also treating a patient who was at risk. His patient Patrick had had a heart attack and then was suffering some aftershocks. He would stop breathing on his own the second they stopped compressions and so it was merely a matter of time. The patient later died after hours of being given CPR and sadly his wife was in the room when it happened. She blamed herself for taking him on a ski trip that she thought must have been too taxing on him and watching her struggle with the guilt had finally opened Halstead’s eyes. He realized he had been making a decision on emotion instead of science and he tried to stop Gabriel’s surgery, but it was impossible to change the family’s mind. They believed their son could walk again with the surgery and they threatened to find another doctor if anyone refused them.

Halstead ’s realization had come too late. He was beating himself up when Rhodes found him and he confessed to his friend that he had made a mistake. Halstead shouldn’t have talked to the family and, luckily for him, Rhodes had beaten while he was down. He left Halstead to await the results of surgery and he meanwhile went to his peer review. Rhodes met with the panel and he received an apology. The panel said they had talked to Bekker and that Bekker assured them that he did everything by the book. They didn’t feel the need to continue their investigation and so Rhodes walked out of that review stunned. He knew he had taken questionable actions when he was treating the patient and so he asked Bekker about it.

Bekker admitted that she lied to the panel. She also told him that she did it for him because she didn’t want him to lose his license and so that was just one more thing that made Rhodes question her ethics. Rhodes later learned that Gabriel pulled through surgery and was going to be okay. It had been good news for the doctor and he thought maybe he should be honest with Goodwin, but Goodwin didn’t want to hear his doubts. She understood why Rhodes had taken drastic actions and she didn’t blame the doctor. He had been working at the time to try and get information on Halstead’s whereabouts and so bringing a man out of surgery a little too soon wasn’t going to hurt anyone.

Halstead had been relieved about Gabriel’s prognosis as well and he thought he needed to rush to Manning side however he had seen her hugging a man and jumped to conclusions. He accused his ex-girlfriend of using the gun as an excuse and so she told him what really happened. She said that the man she was hugging was Mr. Davis. He lost his wife and he could lose his baby daughter to a similar condition. Manning was just being supportive and so Halstead said he needed support too. He then stormed off and there’s no telling what will happen between him and Manning now.

Rhodes had considered who could have made that complaint and he came to believe it was Bekker. It raised all the doubts he had about her and it drew a very compelling picture. Like how she was willing to do anything to gain his attention and starting a fire just to put it out wouldn’t exactly be beneath her.

Love could be toxic and Dr. Charles saw this for himself when the woman he was dating was willing to risk killing her child in order to get her daughter off drugs.