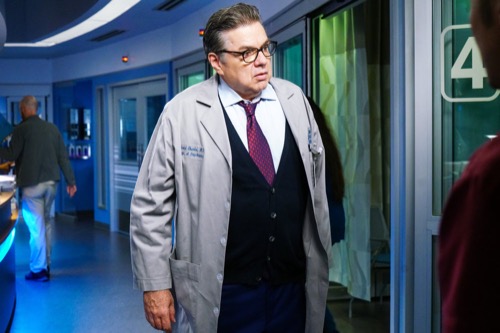 Tonight on NBC their medical drama Chicago Med airs with an all-new Tuesday, October 2, 2019, episode and we have your Chicago Med recap below. On tonight’s Chicago Med season 5 episode 2 called, “We’re Lost in the Dark,” as per the NBC synopsis, “Dr. Choi and Dr. Charles face difficult decisions as a dying man tries to preserve his future life with a controversial scientific method.

Dr. Marcel and April clash over how to handle a mysterious patient and Will questions Natalie’s capabilities. Sharon assigns a nurse to shadow Maggie, much to her dismay.”

Chicago MED begins tonight with Maggie Lockwood (Marlyne Barrett) is finished her cancer treatment, but there is a nasty storm outside and the clinic looks like it is understaffed. She is told she needs to go home and get some rest after her chemo, but she tells the nurse it is her friend’s first day back after an injury; revealing she works at Med and likes to keep things separate. She is warned to be careful as the roads are bad.

Dr. Ethan Choi (Brian Tee) is training several medical students in the ED, something he obviously loves as he volunteers to do it every year. April Sexton (Yaya DaCosta) tells her brother, Dr. Noah Sexton (Roland Buck III). Noah finds Dr. Marcel Crockett (Dominic Rains) is in one of the beds getting a vitamin bag in order to recover from the night shift.

Dr. Daniel Charles (Oliver Platt) greets Sharon Goodwin (S. Epatha Merkerson) while they walk into the hospital with loud thunder and lightning; where he says in some cultures a downpour is considered good luck; suddenly the power goes out and Sharon rushes off to speak to maintenance. Dr. Will Halstead (Nick Gehlfuss) smells the beautiful flowers at the desk, only to learn they are for Dr. Natalie Manning (Torrey DeVitto) from Phillip Davis (Ian Harding). Will is taken aback but says the flowers will look great on her kitchen table.

Choi is informed there is an ambulance a couple of blocks out, but they desperately need help; Chicago Fire is there to help. They rush to the scene where Darren the paramedic has a thready pulse and he is bleeding out. The patience, Mr. Lance is complaining about his chest and they get him into another ambulance and head to MED. They quickly assess both patients under the direction of Choi, but April is kind of pushed to the side on the case by Ethan. Meanwhile, Natalie arrives for her first shift since her near-death experience and is greeted by Maggie, who is thrilled to see her. She says Phillips is great, spending a lot of time with Owen giving her plenty of time to rest; but she is disappointed that her feelings haven’t come back yet. Dr. James Lanik (Nate Santana) welcomes her back but is concerned that it has only been a week and she had such a traumatic brain injury, but she assures him that Dr. Abrahms cleared her but he insists she can only ease back in and only half a shift.

Dr Marcel wants to do a bypass on his patient Dr. Lance even though his medications are working. Noah disagrees with Marcel which irritates him. Marcel reminds Lance that he is one cheeseburger away from a much worse event than he had this morning. His patient gives in and he leaves to go to speak to Dr. Isidore Latham (Ato Essandoh) to set up the surgery. Outside the room, Noah confronts him on being a hard sell on the surgery; Marcel suggests he observe the procedure.

Will meets his patient, Lacy who has never had a seizure before; suggesting the cause could be the gas leak at their school; other girls confirming they have been smelling it for weeks and no one willing to fix it. She has a constant twitch, only starting after the seizure. Elsa Curry (Molly Bernard) will run some tests on her as Will talks to Maggie for a brief moment.

Will talks to Natalie who is devastated about the changes that Dr. Connor Rhodes (Colin Donnell) is gone and Dr. Ava Bekker) killer herself. Will says it was a shock to everyone, but Natalie has healed well; asking about the concussion. He is glad to have her back. She stops him from leaving, apologizing that he had to find out about the engagement the way he did, She is guessing that is what she was trying to tell him that night as she doesn’t remember, but it makes sense.

A gunshot wound comes in 16 yr old who was waiting for the bus. He asks if he is in trouble and if they will call his mom. Natalie applies pressure but is told to back by James. She reassures the patient, causing Lanik to tell him that Natalie is transporting him, causing her to vent to Maggie that Lanik is doing everything he can to prevent her from practicing medicine.

The power goes out again in the hospital, Natalie trapped with the GSW patient, Ethan standing with his medical student in the hallway; the ER is waiting for the lights to come back on. Natalie begins to pound on the elevator doors. Shortly, Chicago Fire returns, the backup generator is completely flooded as Maggie tells everyone all bets are off and take patients to the hybrid OR. Ethan leaves, student Steve with the patient to put in a simple pick line and April follows him where their hands are needed.

In the basement, Sharon learns they will have to wait at least 2 hours; she encourages Maggie to pace herself as today is going to be a marathon. Marcel continues with his heart surgery in the dark but is told they cannot continue it because he will never come off the by-pass. He feels he doesn’t have a choice. Noah is told to scrub in as they need the extra hands.

In the elevator, Natalie tries to warm up her patient as Matt Casey (Jesse Spencer) says they will get him out. They cannot keep him sitting up long enough as he loses blood pressure and blacks out. Natalie is having a hard time staying on her own two feet as well, even losing her vision. Matt promises to be back as soon as they can.

Upstairs, Laci’s mother is yelling that they can’t track down her blood as Will says they are trying to remedy it. Laci just wants medication and her mother says she doesn’t have time; both furious that she cannot play soccer. Laci gets frantic that she cannot play as everyone is counting on her as it is State Finals; something Dr. Charles observes. Maggie is burning up like an egg when Steve calls for Choi for something about Darren. Choi quickly cleans his chest and uses a scalpel telling them to bag him; reminding Steve he saved his life.

Daniel wants to know what Will thinks about Laci’s ticks and that she seems pretty anxious so he might not get any real answers. The school was cleared of any gas leaks. He is rushed back into the room when it appears she is seizing; leaving Will and Daniel looking confused.

Once Laci calmed down, Daniel is impressed with how well she is able to focus on calculus under the circumstances. She vomits and Sharon, Daniel and will decide they need to isolate the girls. Sharon pulls Maggie aside, telling her that she needs to put another nurse on this case due to her own health reasons; but Maggie is persistent and promises to be careful.

Meanwhile, Marcel is determined to go through with the procedure, putting Noah in the middle of things and making him feel everything out and they are able to proceed; hoping to find out if he had a stroke once he wakes up.

Back at the nurses’ desk, April asks Maggie asking where her snacks are so she can get some for medical student Steve as he has been on his feet all day and needs to eat. She encourages him to take a break as the patient is stable. Choi comes in saying they need her, but she stops him from taking Steve, telling him to eat something first.

The third student is no vomiting and Will says they need to isolate the ED, as this could be a superbug. Daniel says the girls are under tremendous stress from school, suddenly Maggie comes out sick. Daniel asks for 30 minutes.

Taylor stats drop when CFD, Matt returns and informs her there is no blood, the entire hospital is out. She is unable to intubate him, handing over the tubing to Casey, who is able to get it in without too much trouble. She asks Matt to get Dr. Lanik as she winces in pain.

Dr. Charles gives all three students medication they believe can work and the girls all follow Laci’s lead. April, Choi, and Steve work on Darren, letting Steve do the paddles and charging. To no avail, thus far.

Natalie and Matt are going to open her patient, Taylor’s chest right there in the elevator; something she has never done before. Inside the ER, Noah is overly excited when his heart begins to pump again and Marcel smiles at him; suddenly the power goes back on while Natalie and Matt work hard on saving Taylor.

Darren and Choi are able to do an x-ray, but there was nothing they can do. Natalie is able to retrieve the bullet just as the elevator opens and he is rushed to one of the ER. Natalie smiles. Choi stands with Steve as trauma arrives to take Darren. Maggie wipes the sweat from her forehead in an isolated room but is able to give a thumbs up to Sharon.

Everything comes back completely normal on all three girls, Else and Will learn that Dr. Charles gave the girls orange tic tacs, recommending they need therapy and some work. This is similar to mass hysteria; its remarkable how far our brains will go in order not to confront something. Elsa reminds Will that no matter how it turned out, he did the right thing. Will tells Natalie that night in the car, he feels she was coming to tell him something else. He apologizes and leaves with her flowers, but he stops her at the door asking if she loves Phillip. Is she sure that she loves him? She admits her relationship with Philip is the only thing that is working right now and greets Philip at the exit.

Noah apologizes to Dr. Marcel, but as far as Marcel can tell he has a great set of hands and will be great in his surgical care. Noah smiles at his praise and realizing he has so many more options now. April and Ethan are leaving for the day when Steve announces that he is not coming back because what they did today is not something he can do every day for the rest of his life. April assures Ethan that he is such a great doctor that sometimes we get so caught up in taking care of patients we forget to take care of each other. He says not April and someday she will make the best mom ever. The two kiss.