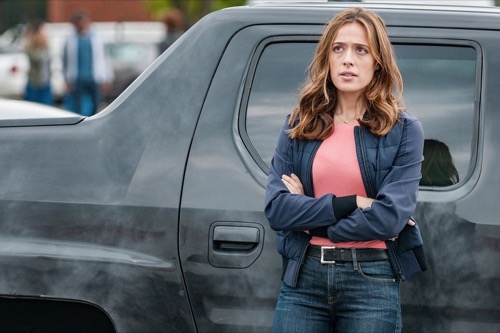 Tonight on NBC their drama Chicago PD returns with an all-new Wednesday, November 13, 2019, season 7 episode 8 called, “No Regrets,” and we have your Chicago PD recap below. On tonight’s Chicago PD season 7 episode 7 as per the NBC synopsis, “After injuring herself while pursuing a suspect, Burgess receives a shocking diagnosis. A homicide case turns into a missing person case, with a sinister twist. Voight has to decide between justice and the letter of the law.”

The team works a sting in a nearby warehouse. They manage to take several men down for drugs. While making the arrests, they find the body of a woman in the grass. Hank shows up to asses the scene. He sends Kim to get looked at after he sees a laceration on her upper arm from a fence.

At the doctors, she is told she is pregnant. She looks upset but heads back to the station. They have an ID on the vic. Kim and Adam head to speak with the girl’s parents. They haven’t seen their daughter Alley in years. She ran off when she was younger.

Back at the station. Hank and the team have a suspect by the name of Ramiro Lopez. They head to find him. As soon as he sees them he takes off in his car. They chase him and manage to stop him. They bring him in and ask him about Alley. Hank offers to help him if he comes clean. They did find drugs in the trunk of his car. He offers up some intel – he saw a white guy raping or robbing Alley. He stopped him but when he noticed Alley had a head wound he ran.

Kim brings Hank some news. A hair on Alley is from a woman in the system named Claire Meyers. Maybe they were being held together? They need to find her. Kim updates the team on Claire. She was kidnapped years ago. They find a person of interest, an old pain teacher. Adam and Kim head out. While they wait for him she tells Adam she is pregnant. Their conversation is awkward. Kim spots the man John and brings him in.

John tells Hank at the station he had nothing to do with Claire. He does remember a guy who used to watch Claire at soccer games. He told the police but they didn’t believe him. The guy drove a plumbers van. They get back to it trying to track down what they can. They come up with a man named Ray who did work at Alley and Claire’s homes years ago.

The team heads there and breaks into his house when Ray doesn’t answer. They look around and find a door in the cellar. h=They make their way in. Claire is inside and on a bed. She is ready to fight but scared at the same time. Kim explains who she is and that she won’t hurt her.

Claire just wants to know where her son is. Ray took him. She becomes hysterical. Hank puts out an Amber Alert on the 4-year-old son, Henry and a BOLO on Ray. Adam goes through Ray’s computer and sees that he is part of the 542 with a friend. They head to the friend’s house to find him on the floor, bleeding. Ray does this to him. They want to know where Ray is. The guy breaks down. Ray beat him up for his ATM card. Then he took off. He needed money.

At the hospital, Kim checks on Claire who shares that Henry is diabetic. Ray loves him. Alley hurt Henry so Ray killed her.

Back at the station, Hank and the others go over video surveillance of Ray at an ATM taking out money. Meanwhile, Kim and Adam receive notification that Ray is possibly outside of a store. They put eyes on his vehicle and radio to Hank. Hank in the other shows up as Kim goes into the store to look for Ray. She runs right into him while she’s on the phone keeping the team updated. The local police show up. Hank and Adam tell him to get lost but the officer doesn’t move fast enough. Ray sees him on his way out of the store, fires a few shots and then runs back into the store.

Kim chases after him as he hides behind some boxes. Adam comes in. He moves customers out of the store as fast as he can as Kim and the others try to track Ray down who makes it out the back, running on foot through an alleyway. They finally get him. He stops running. Kim tries to get him to turn around slowly and drop his weapon but when he doesn’t, turning around, the officer next to her shoots him in the chest. Kim tries to find out from him where Henry is but he dies within seconds.

They start again, trying to figure out where Henry is. Piecing together where Tay has been and what he was buying, it looks like he has been camping. They find Henry in a trailer at a local campsite. He needs insulin and fasts.

Later, Henry is reunited with his mother. Kim wishes them luck. Claire thanks her, telling her she has Henry so she will be all right. She hates Ray but Henry is the best thing that has ever happened to her.

Kim tells Adam that she canceled an appointment she made and needs more time. She doesn’t want to miss the chance to be a mom. Adam tells her everything will be okay.