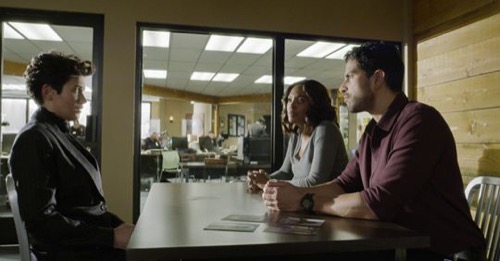 Tonight on CBS their hit drama Criminal Minds returns with an all-new Wednesday, January 9, 2019, season 14  episode 12, called “Hamelin,” and we have your weekly Criminal Minds recap below. On tonight’s Criminal Minds episode season 14 episode 12 as per the CBS synopsis, “Prentiss and the team fly to Iowa to investigate the disappearance of three 10-year-old children who appear to have been abducted from their homes in the middle of the night, with surveillance video from a neighborhood park as their only lead to finding the children’s whereabouts.”

Three kids went missing from their beds on the same night in a small town. The BAU had received this case and at first, they questioned if the kids had left on their own, but they later learned that it had been cold that night and that none of the kids had packed clothing or even bothered to change out of their pajamas. There was something happening in Wesser, Iowa and the local police department didn’t want to do. It could have been anything until they found security footage from the local park and had seen for themselves what happened to the kids. The kids all went to the swings and they waited there until a white van came to pick them up.

The driver of this white van was the Unsub. He kidnapped the children, but the team couldn’t figure out how because the kids hadn’t been coerced into the van. It had seemed like they were going with the Unsub willing and so the team didn’t know what they were looking at because they had never seen a child abduction like it. They again pondered if the kids hadn’t been happy at home and they could no evidence of this. The kids were all at the top of their class and came from stable families. They also didn’t know each other and even went to different schools. So there was no way this was staged by them to leave together.

The team took a second look at the security footage and they realized that the children appeared to be in a hypnotic state. The kids had blank expressions and all lined up to get into the van but at the last moment, there had been one child that appeared confused. It was almost as if he was waking up from something and then quickly fell back to sleep. The team saw that and wondered if the children had been brainwashed. They checked the kids’ homes and saw that at one child had been up late at night playing a computer game. And there really was only one motive to manipulate and then kidnap children, so they looked into nearby sex offenders that were acting suspiciously.

It was how they found Arthur Brodie. Brodie was a registered sex offender with access to a van and a thing for little kids. He also called in sick the morning the kids were reported missing and so they found Brodie at a park. He was watching underage girls and, while he wasn’t their Unsub, they were still able to arrest him for parole violation. With Brodie behind bars, Mayor Rob Tremaine had wanted to announce to the media that they caught the guy and he got testy when the team told it was too soon. They couldn’t allow anyone to lower their guard with the Unsub still out there and so the mayor asked them to hurry up already.

The mayor was a father to a young child and part of the stress he was putting on the team was from him being a worried parent. But the team talked to him. They told him that he needed to be the face of calm when the world was panicking and he tried to believe them however another child went missing that same night. It was probably a power move from the Unsub as a way to say that he still get to their kids despite how many precautions the parents took. The parents of little Katie had barricaded the door with the furniture and Katie was able to get out because whatever compulsion she was under was so strong that she jumped from a second-story window.

What makes it all worse was the part where the Unsub mailed them something. The Unsub sent them an envelope of nail clippings from the kids and he also included a video message. The message showed the children all crying and the Unsub said: “How Does It Feel?”. The team took a lot from the video and they believed that the Unsub was an Injustice Collector. He was motived by revenge because he lost a child. It didn’t matter whether it was to death or separation. He lost a child and blames the community for letting it happen. The team identified the Unsub as a local who was cyber-savvy and has access to children.

The team tried to create more for their profile when night fell and another child was targeted. The Unsub didn’t use his manipulations to get to his latest victim and instead he kidnapped the child in person. He went over to the mayor’s house, killed the wife, and then kidnapped the son Timmy. It was a big change in MO and a significant escalation. The team didn’t know what was different and so they spoke to the mayor. Mayor Tremaine said that his son didn’t have access to his computer or his cell phone recently because he didn’t do his chores and so he lost access. The team checked both and they found videos sent to Timmy on the night the first three kids went missing.

Timmy was supposed to be part of the first group and when the Unsub couldn’t reach him – he went back to traditional methods. So the team found how the Unsub was getting the kids. It was through computers and subliminal messaging. The team also figured out how he was choosing the kids. The kids all attended an activities program at the same center. The center was open to the public and so anyone could have gotten seen the children but there only one computer teacher that was fired from the center because of inappropriate behavior with children. It was believed that this Wayne Hollis had molested children and a couple parents had stirred up this rumor.

Those same parents were punished by Hollis for what they did to him and for what they did to his son. His son was fifteen and hadn’t been found at the house but there were signs of someone hanging themselves and so that must have set off Hollis. He blames those other parents for the death of his son and the loss of his good name. Hollis also sent messages to kids calling himself the Pied Piper and that ends with the children’s deaths, so the team knew that they had to reach Hollis in time and they found him at the park. He had pulled a weapon on a woman with her baby and he wanted one last chance at blaming the world before he killed himself.

Hollis died with the knowledge of where she stashed those kids and so the team tried to use what they had. They found soil on Hollis’s shoes that looked odd and they traced back to a meat tenderizing company. The company was shut down only they still had a fridge and inside of it they found the kids. The kids were traumatized but were in good health and so they were quickly reunited with their parents.

And so the team was happy to put this particular Pied Piper to bed.