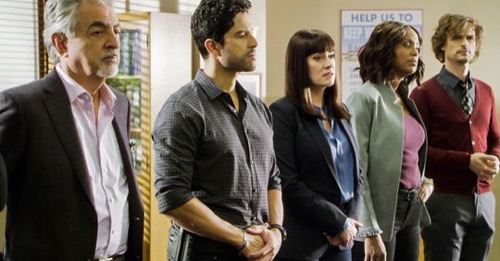 Tonight on CBS their hit drama Criminal Minds returns with an all-new Wednesday, January 23, 2019, season 14  episode 13, called “Chameleon,” and we have your weekly Criminal Minds recap below. On tonight’s Criminal Minds episode season 14 episode 13 as per the CBS synopsis, “Rossi questions his actions in the aftermath of a near-death struggle with a serial killer who appears to have outsmarted the BAU.”

Rossi wasn’t doing so well. He went through something out in the field and it all started when he and the team were called out on a single. The single stood for one murder. There wasn’t a pattern because the Unsub hadn’t only shown them what he or she did to the one victim, but it was still considered a case for the BAU because of how the victim was killed. The victim had had her whole face removed and it had been expertly done. The Unsub must have killed before and had never gotten caught. The killer had also used fire to destroy the evidence and the crime scene itself. There was no DNA left behind and it again pushed the theory that this Unsub was a pro. And so the question was why?

Why this victim? The woman that was killed was Monica Feinstein. She was a single mother with an adult son and she tended to volunteer with people at risk. It could be that she met someone through work and that the Unsub felt so bad for what he did that he used fire to cover his shame. The team thought it best to talk to Monica’s son Carl and Carl said he knew who killed his mother. He believed that it was her boyfriend Mac. Mac’s real name was Paul McIntyre and he met Monica on a dating site. He claimed to be a family man and didn’t want to move in because he didn’t want to risk Monica’s virtue. Mac went out of his way to appear non-threatening and it worked until Carl heard Mac on the phone with another woman.

Mac called this other woman “honey” and even said, “I love you”. He later tried to claim that he was speaking to his mother and Monica had believed him, but Carl knew better and he left when Mac proposed to his mom. He couldn’t believe that his mother would buy the lie or even agree to the proposal. Carl had thought his mother was making a mistake and so he left the two of them alone together. His mother was murdered that night and Carl believed that it must have been Mac because he couldn’t think of anyone else that was willing to hurt as nice as his mom. He felt so sure about it that he got the team to seriously consider it and they looked up Paul McIntyre. There was no man with that name and the picture of the man claiming to be Mac wasn’t in the database.

Garcia could find no trace of who this Mac really was, but she did find his profile on a dating website and it had been worded to attract a woman like Monica. Monica was single and middle-aged. She was ripe for someone running a Lonely Hearts con and that’s what happened. Monica had put Mac on her bank account and he’s been draining money from ever since. He went on to take the whole thing after she died and so the team couldn’t figure out why the face thing or the fire? A con artist would have no need to go to such lengths and so the team went looking for their Unsub by using the fire. They were initially looking for the face thing and that could have been something the Unsub worked his way up to. He could have begun with the fires and so the team had Garcia check.

Garcia expanded her search and she found another single woman that was up there in age. She began dating a man not long after she was widowed and she had been lonely. The Unsub pretended to be her dream man and then he proposed to her right before she died in a fire, but he hadn’t drained her account. He had stopped with killing her and so it was never about the money. He kills the women because he hates them. He was a man that didn’t know himself and he took his hatred for women to an extreme. The Unsub blames them for him having to change his name and his looks. He was someone without an identity and that’s why he began to do with to his victims. He took their faces because he didn’t like he had one of his own.

Garcia found more victims as she expanded her search to other states and so the team tried to piece together the truth by going through every lie the Unsub told his victims. He told them that he works for a consulting firm based in Aberdeen and that he has to travel the country for his work. Another story he would always use is that he had a daughter that drowned in the bathtub when his mother was her. He never forgave his mother for what he did and that could explain his resentment with women. The team went down to Aberdeen to find the records and instead they found out a record for bigamy. The Unsub’s mother was identified as Roberta Lynch and she would travel all around the country marrying men in order to steal from them.

Roberta was a hot mess and that’s what messed up her son. Everett Lynch hated women because he thought they were all like his mother and he hated his mother. His mother forced him to take on new names and new appearances whenever she finds someone to steal from. Roberta was in prison now for crimes and so the team spoke to her. She bragged about her past life and how she would laugh at the men she would con with her son, but she had been shocked when the team informed her that Everett was killing his victims because he couldn’t kill her and so they asked her if it had anything to do with Grace. Grace was the supposed granddaughter that Roberta killed with her negligence and she stopped talking the moment the team said the girl’s name.

Roberta refused to talk and so the team had been forced to leave, but later that day she contacted her lawyer and told her lawyer to pass on a message to her son. She wanted Everett to know that the FBI was looking for him and she called him a bastard for using Grace. Grace was off-limits! Only the phone call warned Everett and so he went on the run again. He took his latest victim with him as a hostage and he left behind all the faces at the house because he wanted the FBI to see. They saw that they underestimated how many women he actually killed. They also met a girl in the house that claimed to just be the daughter and so they didn’t know whose daughter she was until she tried killing them all.

It turns out the girl was Grace. She had been brought in on her dad’s crimes and she yelled out her to her father when she began attacking the team. They were quickly able to subdue her and they went after Everett, but all they could do was rescue Mary. Mary had been found by some on the team and it had been Rossi that tried to follow Everett. But Everett got the best of him and managed to escape.

He had left his knife behind by a passed out Rossi because he wanted the other man to know that he could have killed him and didn’t.

Rossi didn’t know how to come back from that because he thought maybe he had been old or too weak, but it was his fiancée that got through to him and she helped to understand that he still needed to find Everett.

The best way to do that was by talking to Grace…