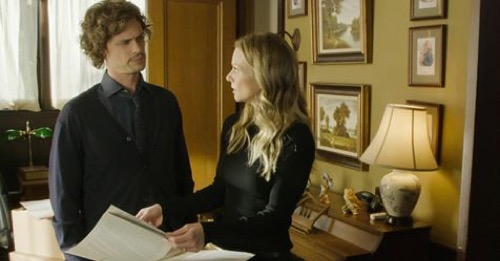 Tonight on CBS their hit drama Criminal Minds returns with an all-new Wednesday, January 2, 2019, season 14  episode 11 Winter Premiere, called “Night Lights,” and we have your weekly Criminal Minds recap below. On tonight’s Criminal Minds episode season 14 episode 11 as per the CBS synopsis, “The BAU team heads to Portland, Ore., to investigate a chilling abduction that may be linked to a local couple killed in their home a week earlier.”

A home security system picked up on a man claiming he was abducted. The victim was soon dragged away by his captor and so all the local authorities had on the pair was what they saw on the video, but it had been enough to raise a few alarms. The victims had tape over his wrists and his head. It was reminiscent of another couple who had recently been found murdered and that’s why the cops were willing to believe that the victim was telling the truth. He claimed that he had been kidnapped and he asked that someone them which indicates the Unsub had kidnapped another couple. The fact the man had been able to get away at all had been a miracle and so the police were willing to do anything to find this missing couple seeing as they hadn’t been fast enough to rescue him.

The BAU was called in and the team responded. They flew out to Portland, Oregon to track this Unsub and they were already theorizing on the plan. The Unsub went out of his way to target couples and that wasn’t the norm. The team knew that predators usually target someone on their own and who the couple is isolated. People like that tend to have a few days before anyone reports them missing, but couples were different. It would be noticeable if they both disappeared at the same time and someone, whether it was a friend or a family member, would have gone to the police. So the team looked at this other couple. The other couple was a doctor and his charitable wife who were found by their son.

The son had wondered why his parents weren’t returning any of his messages and so he went over there when he found the bodies. He was also technically the first on the scene and the team had talked to him. He was asked about what he noticed when he first came in and he said how it had been dark. There weren’t any lights on and it had been pitch dark inside the house. The son said he had to turn on the lights just to navigate around the place and so that begged the question of how the Unsub was seeing. The only way the Unsub could have was if they were wearing night goggles. The team thought maybe the goggles was a means to hide his face and that would have been plausible if the Unsub hadn’t blinded his victims.

The couple had been blinded by some torch. It was enough to remove all sight from them that they hadn’t been able to escape. Their restraints hadn’t been tight and so they had been allowed the opportunity of getting out of the restraints but were left having to crawl around on the floor in order to feel their way to the door. Which was something they never got reach! The Unsub had been lying in wait and he had been watching over as they stumbled. He probably even took delight in crushing their hopes of an escape and so the team finally figured out that he was hunting. The Unsub was lashing out at his victims and drawing out their pain as a way to validate how he felt. And so the first couple couldn’t have been chosen at random.

The team had Garcia looking into the victims. She found out that the man from the video was a runner from out of town. JP McCoy had only come to Portland to do a charity run with his fiancée Nikki and was staying at a place they rented when they had been kidnapped by a man wearing unique sunglasses. The man with the sunglasses was the Unsub and a teenager that lived next door hadn’t known what he was witnessing was a kidnap, but the glasses he described was something that the visually impaired would wear and so that explains why the Unsub was blinding his victims. He was a sociopath with a condition that has made him feel even further isolated and so that’s why he darkens the room as well as blind his victims. In such an environment, he felt invincible.

But the Unsub wasn’t killing his victims at their homes. He would do the killings somewhere else and so the team questioned why the Unsub had killed the first couple because Dr. Mendelbaum and his wife were the first kills. They were the ones that were the most personal for the Unsub and so they looked into the doctor’s past where they eventually found a disturbing story. They found out that Dr. Mendelbaum would treat some of his teenage patients with aversion therapy and that was his way of trying to get them to overcome their fears. It had gone horribly wrong with one patient who killed himself and the doctor ended the therapy sessions right after that. The team figured that one of his former patients could be the Unsub and so they went through the doctor’s files.

They later found someone named Patient 20411. He was afraid of the dark and it seems his parents tried to continue his therapy without the proper measurements. The parents locked the boy in a dark closet for hours because they thought they could “toughen” him up. It backfired and so the parents were probably the first people the Unsub killed. He then went on to kill the doctor and his wife because he blamed them too, but they didn’t understand where JP and Nikki came into this until they spoke with who rented the house. The house was rented out by a young woman who was asked if she ever 20411 and she has. She said it reminded her of a teenage boy who was blind and how this boy lured her away to hurt her. And luckily she escaped from him and got help.

The boy she described lived at 20411 Mansard Lane. His name was Dustin Eisworth and he’s been in trouble ever since the girl reported what he did. He had gotten kicked out of school, sent to reform school, and was then sent to jail when he blinded someone in a bar. He was only supposed to serve three years and he ended up spending ten years in jail because he killed someone on the inside. Dustin was so dangerous that he spent the rest of his sentence in solitaire where his condition would be even more impaired. He just got out and he’s been killing everyone he blames for why his life was the way it was. JP and Nikki had merely been unlucky to be staying at the wrong house when they did and so they were tortured by Dustin.

Dustin killed JP and he was about to kill Nikki when she got to the window in time to call down for help. The team had just gotten to the address and so they heard the screams. They told Nikki they were coming in to get her because they could see she was injured. As for Dustin, he was killed when he tried to target one of them and so he was no longer going to be a threat in the future.

The team got to Nikki and they got help for her, she still lost her fiancée who had been killed when he tried to get help again.