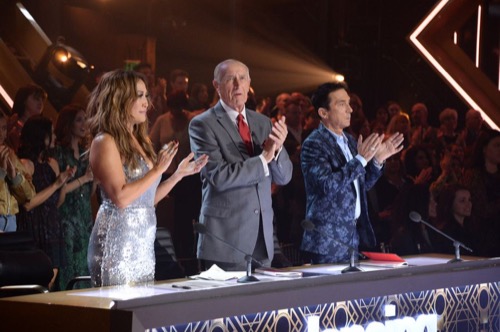 Tonight on ABC the glitz and the glimmer returns to the ballroom as Dancing With The Stars when season 28 episode 11 of DWTS airs! We have your all-new Monday, November 25, 2019, season 28 Episode 11 Dancing With The Stars recap below! On tonight’s DWTS Season 28 episode 10 Finale, “It all comes down to this as four celebrity and pro-dancer couples return to the ballroom to compete and win the Mirrorball trophy on the 11th and final week.”

After weeks of competition, the glitz and the glamour is heading to the Dancing With The Stars’ dance floor for one final night.  Tonight’s episode of DWTS opens with the remaining couples dancing to “Last Dance” by Donna Summer.

Tonight the stars of the season are back as the final four perform one last time.  There is no judge’s save tonight.  There will be two rounds of dancing where each couple will do one repeat performance from earlier this season. And in the last element of competition, the couples will perform the most anticipated dance of the season—the fan-favorite freestyle routine.

Ally Brooke and Sasha Farber perform their jive as their repeat performance.

Judge’s Comments: Len: “Well we have been going for 11 weeks and there is only going to be one winner.  You have done your chances no harm at all with that jive, fantastic.”  Bruno: “That’s how you start a show on top gear, full throttle going for maximum effect.”  Carrie Ann: “I just want to say there has been a lot of controversies but that is why you are here tonight. Well done!”  SCORES – Carrie Ann: 10 Len: 10 Bruno: 10 TOTAL: 30/30

Lauren Alaina and Gleb Savchenko perform their Foxtrot as their repeat performance.

Judge’s Comments: Bruno: “We can tell how much you loved that song.  What I love about you is that you bring the character to life, I like your commitment.  Your lines have improved and your balance.”  Carrie Ann: “I am going to ask, are you okay?  I feel emotionally, you were not as open as the first time yo0u danced the foxtrot.  You have improved as a dancer.  I feel like you are holding back. Just let it all out.”  Len: “This had a mix of flare and care.  Well done, nice job.” SCORES: Carrie Ann: 9 Len: 9 Bruno: 9 TOTAL: 27/30

Kel Mitchell and Witney Carson perform their Jazz dance as their repeat performance.

Judge’s Comments: Carrie Ann: “That was great the first time you did, and better the second time you did it.  You are so spot on with everything you do.”  Len: “There is no hiding place at the finale.  You were right out, leader of the pack.  It was terrific.” Bruno: “Uplifting, positive, the way you interpret your body is so beautiful to watch, congrats!” SCORES: Carrie Ann: 10 Len: 10 Bruno: 10 TOTAL: 30/30

Hannah Brown and Alan Bersten perform their Viennese Waltz as their repeat performance.

Judge’s Comments: Len: “I told you last time changes and you did it, you put them in.  What lovely sweeping movements across the floor. Well done!”  Bruno: “You are in full bloom, much more confident, radiant.  Sometimes happen you went on the wrong foot there was an incident,  You got lost in the dance, it was beautiful.”  Carrie Ann: “I’m not sure what he was looking at it was the best dance of the season, so magical.  I love that you did most of the routine right in front of my face, thank you!” SCORES: Carrie Ann: 10 Len: 9 Bruno: 9 TOTAL: 28/30

We are seeing some highlights of the full season of DWTS including dances, guest judges, injuries and fun moments.  The entire 2019 cast is reunited to perform with Pitbull and Ne-Yo perform to the songs “3 to Tango” and “Me Quedaré Contigo.”

Judge’s Comments: Len: “It was a high-energy, fast pace, nice salsa. What I loved was the music was recreated in every moment you made.  Well done!”  Bruno: “You unleashed the star power! What is it Vegas, you killed it!  Apart from the fact that I loved the tribal.  It was fantastic it was a showstopper!”  Carrie Ann: “As you were dancing I was wow.  I have seen every single freestyle and I have never seen anything like that.  That was.. thank you can you do it again!”  SCORES – Carrie Ann: 10 Len: 10 Bruno: 10 TOTAL: 30/30

Judge’s Comments: Bruno: “It’s like happy hour at the saloon.  Your line dancing was delicious.  Get me some line dancing and some cowboys and I am a happy man.”  Carrie Ann: “Everybody’s freestyle looks so different, this is the perfect Freestyle for you.  I have loved watching you perform that was a great end to the season.”  Len: “What I liked you paid homage to your roots.  It was a country dance.  Well done!” SCORES: Carrie Ann: 10 Len: 10 Bruno: 10 TOTAL: 30/30

The professional dancers that will be participating in “Dancing with the Stars – Live Tour 2020” are dancing to “How Do I Know” performed by Ray Chew Live.

Judge’s Comments: Len: “That got me so unaware.  I am used to you doing lyrical movements.  You came out sharp, crisp and it was great!”  Bruno: “From the dramatic to the acrobatic to the sexy you did it all.  The open sequence was so beautifully in sync it was superb!”  Carrie Ann: “Hannah Brown you are living your best life.  That was a victorious freestyle.  There was one small stumble but what you did after, whatever1” SCORES: Carrie Ann: 10 Len: 10 Bruno: 10 TOTAL: 30/30

Judge’s Comments: Carrie Ann: “Okay, my inner fly girl is so happy.  You represented you brought Chicago house to the ballroom.”  Len: “I am not going to be the party pooper, it is not in my nature.  I like to see different dances.  This was similar to the first dance you did.  I am not saying it was not good, it was really good (Many boos from the crowd)” Bruno: “What a ride and what a night. Loving the Chicago footwork, I have to say the final acceleration, the tempo was exhilarating.  You brought the house down.” SCORES: Carrie Ann: 10 Len: 9 Bruno: 10 TOTAL: 29/30

Tom announces while we are waiting for the votes to be tabulated Mega-superstar Cher will perform her classic “The Beat Goes On.”

Before they make the announcement each of the remaining four contestants are played messages from their families and friends. 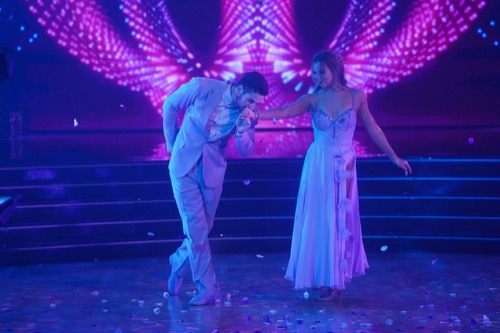