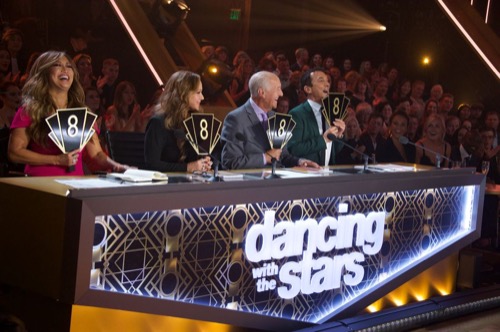 Tonight on ABC the glitz and the glimmer returns to the ballroom as Dancing With The Stars when season 28 episode 5 of DWTS airs! We have your all-new Monday, October 14, 2019, season 28 Episode 5 “Disney Night” Dancing With The Stars recap below! On tonight’s DWTS Season 28 episode 5 as per the ABC synopsis, “There will be Disney magic in the ballroom as nine celebrity and pro-dancer couples compete on the fifth week.

For the first time in the show’s history, the opening dance number will take place at the Disneyland Resort in Anaheim, California, in a pre-recorded segment and will feature the cast on Main Street, U.S.A. and in front of Sleeping Beauty Castle, choreographed by the acclaimed Zach Woodlee (“Grease Live” and “Glee”).”

It’s Disney Night. The opening number was held at Disneyland and many of the stars tonight were dressed up as Disney’s most beloved characters. Sailor Brinkley-Cook, for example, got to be Cinderella. This was a great fit for her because not only was she a huge Disney fan, but she looked like Cinderella. She had blonde hair and blue eyes. She also grew up having watched the films and so she knew had to act the part as well. Her dance this week was the Viennese Waltz. The Waltz must be almost effortless in its execution which was hard because at the same time it also required a lot of effort.

This simplistic dance has tripped up people before. Yet, Sailor and her partner Val put their best foot forward. The two great to the untrained eye and thankfully the judges saw the same thing as the audience. They saw a beautiful and magical dance. Len called it light and fluffy. He did wish that there had been something more there though for the most part he was happy with what he saw and the other judges felt the same. Bruno especially loved how well she threw herself into character because he said she became Cinderella onstage. And Carrie felt the same because the dance did do what it was supposed to.

The judges, however, felt a little differently about Karamo. Karamo and his partner Jenna were reenacting Lion King. The dance started out strong because Karamo was surveying his Pride at first. So, the dance didn’t start to slide until later. Len believed it came down to the footwork. He said it wasn’t as neat as it was supposed to be and yeah there was some of that as well. There was also a chemistry issue because Carrie felt that they were leaning into their chemistry for each other and she had needed some of that chemistry to get the dance to come together. And so only Bruno was truly impressed with the dance.

The judges gave Karamo a 21 out of 30! It fell short of Sailor’s 24 out of 30 but both were still great scores and most importantly Karamo never once lost his smile. He had dedicated his dance tonight to his sons and it’s the reason why he started crying in the middle of it. He was just so happy to see his babies that he lost it. Then again Karamo was such a sweet soul that it would be wrong to send his home. He also fell in love with Disneyland and it had been the first time going there. He deserved to stay another week and to go back to Disneyland.

The next dance was a jazz routine set to Mary Poppins. Kate Flannery and her partner Pasha had this one and they both loved it. Kate was very enthusiastic about jazz because she said that’s a character-driven dance and that it closely fits her personality. Both of them were both coming off a low point last week. So, they were ready to prove themselves. They threw everything into this dance and even had a costume change on stage. It was very Mary Poppins and it was very cute because everyone enjoyed this one.

Kate and Pasha were a great fit. She said that she was here for one season, but that he should be here forever and hopefully, everyone was taking that ringing endorsement. The judges for their part had loved the dance. They thought it brought back the best aspects of their former routines and they loved how fun it was. The judges, despite a minor mishap when Carrie fell out of her chair, had heaped praise on this dance and they also gave them the same score. Kate and Pasha received 24 out of 30. And it was well-deserved.

Sean Spicer went next with his partner Lindsay. They danced the quickstep set to Toy Story and this dance was dedicated to Sean’s dad. His father was a great hero to him and he sadly passed away in 2016. Before he did, Sean and his whole family took a Disney trip. They went on all the rides and just got to have fun. Sean never forgot that trip and he was happy to have a Disney Night. He was also happy that this dance was easier for him than the others. Sean had his best night with this dance and all the judges said as much.

Even Len was surprisingly in a cheery mood. He liked Sean’s footwork tonight and there was more good than bad this time. Carrie was perhaps the happiest out of all the judges with Sean because she can see how far he’s come and so she ended up giving him the highest score. She gave him a 7 when the other judges gave him two 6(s) and that leaves him with a 19 out of 30. Which again wasn’t so bad compared with how far he’s come.

Ally Brooke went next with her partner Sasha. They had a contemporary number set to Beauty and the Beast. This was great for Ally because she was such a big fan of the story that she wanted to have some parts of it in her own wedding one day so she was happy. Her being happy also translated well into her committing herself. She truly gave this dance everything because at the end of it she became Belle. She was Belle and Sasha was a great partner. They had the lightly sweet side to the dance and then there was some angst.

It was contemporary so there wasn’t a structure there. The dance was instead about emotions and the dancers brought that out in each other as well as the audience. Tom had felt moved and he was just the host. The judges also loved this dance and they especially loved how well both dancers bought into the story. They had great chemistry. Sasha may not have looked like the Beast, but he was definitely the Prince. The judges had loved this dance so much that they gave it the highest score of the night. They gave it 27 out of 30.

Up next was Lauren Alaina. She and her Gleb were dancing the samba set to Little Mermaid. She was another Disney fan and Ariel is her favorite. Ariel was a singer like her and most of the movie was about her wanting more for herself and it all depended on her voice. Lauren compared it to her own life. Its why she drew such strength and loved her so much. Lauren was happy to be Ariel and the downside was the samba. It was the hardest dance she’s ever had to do and she actually lost count in the middle of it.

The audience watched as she forgot what to do with her arms. She just started moving them around at one point until eventually, she remembered what to do and so the judges were bound to notice a little thing like. It was Carrie that brought up. She went on to say that Lauren fell back into the routine pretty quickly and so she gave her points for that. The judges would give her 23 out of 30 and that wasn’t so bad.

Kel Mitchell went next with his partner Whitney. They had a jazz routine set to High School Musical and this dance had Kel in his element. Everyone thought so. This was his best dance yet and you could tell he was comfortable. He was happy, dancing, and he was actually the star of the dance. Whitney was there but she wasn’t the sole focus. She was more like the dressing than a genuine partner and Kel meanwhile just shined. He was great and the judges felt the same. They all commended Kel for this dance.

They all had great things to say. Len was becoming grumpier as the night went on, but he couldn’t take away from the dance and neither could his score. He gave them an 8 when everyone else gave them a 9 and so the couple came away with a 26 out of 30. Not that Len’s mood got any better. He was grumpy with Kel and was even worse with the next couple.

Hannah went next with her partner Alan. They were dancing the foxtrot set to Aladdin and what’s great about is the love story involved. Hannah loved the part where Aladdin convinces Jasmine to join him in a whole new world. It sounded romantic to her and she couldn’t wait to play that out with the foxtrot. Hannah probably gave one of her best performances this season and surprisingly it just wasn’t enough for Len. Len was a stick in the mud. He was very sarcastic when he said the dance was great and everyone began booing him from then.

The other judges, however, had loved the dance. They thought it was beautiful and graceful and so they couldn’t see what Len’s problem was. Len couldn’t even explain it himself. He was just grumpy for no reason and he took it on the scores. He gave Hannah a 7 when everyone else was giving her and so she walked away with 25 when she could have gotten higher.

Thankfully, the last routine was up next. James Van Der Beek and his partner Emma danced the paso doble set to the Pirates of the Caribbean. They had taken the criticism from last work and they worked on their chemistry. It even showed that they worked on their chemistry. This dance had come together with beautiful and there was a touch of aggressiveness that brought out the complexities. This time Len wasn’t as grumpy with the dancers as before, but he was prissy with Tom and so it was a good thing that this was the last dance.

James and his partner brought out everything in this dance. There was drama and passion though Len didn’t seem to be on the same page as everyone else. He gave them an 8 while the other two judges gave them a 9 and so the couple was ending the night with a 26 out of 30. And it was a crying shame because they deserved higher.