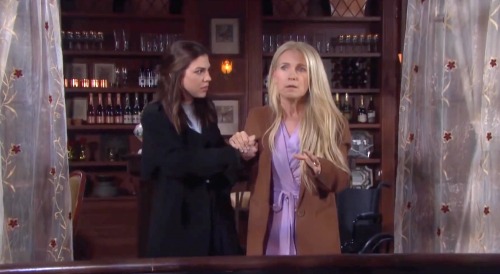 Days of Our Lives (DOOL) spoilers tease that Jennifer Deveraux (Melissa Reeves) will soon have a scary experience. As DOOL viewers know, she’s been convalescing in the hospital since she woke up from her year-long coma. She’s dealt with several shocking pieces of news, including the deaths of Adrienne Kiriakis (Judi Evans) and Haley Chen (Thia Megia), but there’s one thing that really puzzles her, and it concerns what put her in the coma in the first place.

Princess Gina then ran off with the flash drive that Jennifer had that proved what Rolf had done to Hope. And now that Jennifer has awakened from her coma, her memories for what happened just prior to her fall is sketchy. She can’t remember who was there and what happened, but she does feel that the person who was put in jail for her attack – Eve Donovan (Kassie DePaiva) – might have been falsely accused.

Jennifer doesn’t know why, but the notion of Eve being on the balcony and pushing her just doesn’t ring true. And now Eve has asked Abigail DiMera (Kate Mansi) to look into the case further, to find evidence that she was framed. There’s been a lot of talk on DOOL about the security footage that “showed” Eve at the bistro on the night of Jennifer’s fall, but Eve claims that the footage was doctored.

Well, Abigail is on the case now, and as a good investigative reporter, she’s not going to let the matter go. And neither is Jennifer, for that matter, since she feels that something is off about Eve being her assailant. So, according to DOOL spoilers, Abigail will soon take Jennifer back to the scene of the crime. For the first time since her accident, Jennifer will head to the bistro, with her daughter by her side.

Interestingly, DOOL spoilers indicate that something shocking is going to happen while Jennifer and Abigail are at the bistro. It appears that Abigail will lead Jennifer slowly out onto the balcony to see if it will jog any memories of that fateful night. But what’s going to happen? Will Jennifer remember something? And will Princess Gina know about their planned trip to the bistro and crash the party?

Days of Our Lives spoilers indicate that Princess Gina will actually consider eliminating Abigail as she gets closer to the truth that Eve didn’t push Jennifer. That sounds pretty ominous, so if Princess Gina gets wind of Abigail and Jennifer’s trip to the bistro, then she might decide to show up and eliminate both the Deveraux women! At the very least, she’ll probably want to know what they discover when they’re back at the scene of the crime.

At any rate, it seems that something pretty big is going to happen at the bistro. Do you think that Jennifer will remember who pushed her…and why? Stay tuned to DOOL and don’t forget to check CDL often for the latest Days of Our Lives spoilers, updates, and news.