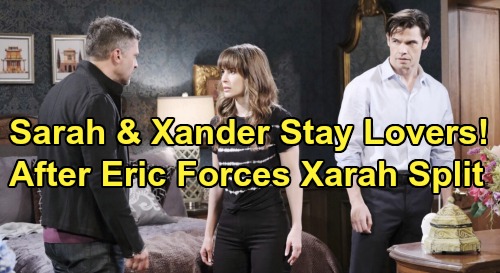 Days of Our Lives spoilers reveal Eric Brady (Greg Vaughan) has a demand for Sarah Horton (Linsey Godfrey). Now that he knows the truth about Mackenzie “Mickey” Horton (the May twins), Eric will start issuing demands. He won’t go after Sarah for custody if she dumps Xander Cook Kiriakis (Paul Telfer). However, could Sarah secretly defy Eric in the name of love?

DOOL spoilers confirm that Eric has strong feelings about Xander being in Mickey’s life. He doesn’t trust the former bad boy, especially after everything Xander has done to terrorize his family. Remember when Xander held Nicole Walker (Arianne Zucker) hostage? Remember him faking his own death? Remember all the evil things Xander has done? That is where Eric’s head is at right now. However, Xander is a changed man and it is all due to his love for Sarah and Mickey.

But you can’t tell Eric that Xander has changed. He had a paternity test altered so Eric wouldn’t find out that he was Mickey’s father. Even though all of this was done for Sarah, Eric puts all the blame on Xander. Now, he is threatening Sarah that she either dump the reformed villain or she could lose custody of her infant daughter.

We know that Sarah is feeling really torn about the decision. She has grown to love Xander and he has been Mickey’s dad ever since she was born. So to take all of that away from him rips Sarah apart inside.

However, she also can’t risk losing her baby girl. Sarah doesn’t have a leg to stand on and once a judge hears how she kept Eric from knowing he was the father won’t look good on her. So, she tells Xander about Eric’s demand.

Days of Our Lives spoilers reveal that at first, Xander decides to go after Eric. Sarah worries, as she knows exactly what the man is capable of. However, she also knows that Xander’s love prevents him from hurting her or Mickey.

Suddenly, Xander returns and announces he has changed his mind. He loves Sarah and Mickey so much that he can’t bear causing them any additional pain. Xander agrees to back off and let Eric be a father to Mickey, even though it is breaking his heart.

Considering how much Sarah loves Xander and the fact that there are a lot of “Xarah” fans out there, we speculate that there must be a resolution to this. Sarah has been a goody-two-shoes for too long and she is much more interesting when she misbehaves a bit. Could it be possible that she will secretly see Xander despite Eric’s threat?

Could ‘Xarah,’ Xander and Sarah, end up becoming secret lovers behind Eric’s back? Stay tuned to DOOL and don’t forget to check CDL often for Days of Our Lives spoilers, updates and news.