Days of Our Lives Spoilers Next 2 Weeks: Ben Stabbed, Clyde Thrown Back in Solitary – Gabi Kicks Chad Out – Ciara Gets Terrible News 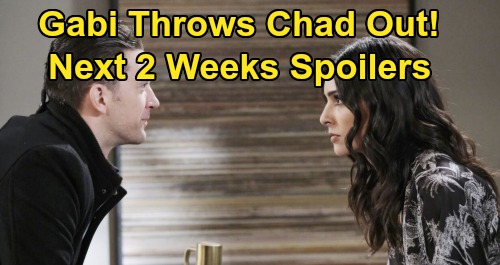 Days of Our Lives (DOOL) spoilers for the next two weeks tease that some surprises are in store. During the week of December 2-6, Sonny Kiriakis (Freddie Smith) will pay Evan Frears (Brock Kelly) a visit at Rafe Hernandez’s (Galen Gering) place. Evan serves as a nanny to David Ridgeway, so he spends most of his time there. He’ll be quick to invite Sonny in after he opens the door.

Sonny will want to return Evan’s scarf, which was left behind at the Kiriakis mansion on Thanksgiving. They’ll end up chatting over pie before Rafe comes home. Days spoilers say Rafe will interrupt a warm moment before they’re alone once again. As Sonny prepares to leave, Evan will plant a kiss on him.

Part of Sonny will enjoy the lip lock and their growing connection, but he’ll choose to let Evan down gently. He just won’t feel right about this since everything’s so up in the air with Will Horton (Chandler Massey). Speaking of Will, he’ll be in grave danger at Statesville. When Clyde Weston (James Read) prepares to attack Will, Ben Weston (James Read) will leap into action.

Ben will get himself stabbed as a result, but at least he’ll save Will’s life. Meanwhile, Clyde will be locked back up in solitary again. He won’t be a threat to Will in there, so that’ll let Ben breathe a sigh of relief. Over with Ciara Brady (Victoria Konefal), she’ll break into Xander Kiriakis’ (Paul Telfer) locked metal box and take a look inside. Ciara will be hoping for proof that could nail Xander and Victor Kiriakis (John Aniston).

Speaking of Xander, Eric Brady (Greg Vaughan) will make a joint custody demand that’s related to him. Days of Our Lives spoilers say Eric will play hardball with Sarah Horton (Linsey Godfrey). He’ll want Xander out of Mackenzie “Mickey” Horton’s life completely. Since Sarah will be terrified of Eric taking her to court, she’ll be in a tough situation.

In Rome, Eli Grant (Lamon Archey) will arrive to carry out Gabi Hernandez’s (Camila Banus) mission. He’ll want to thwart Chad DiMera’s (Billy Flynn) plan, but Rome has much bigger things to offer – like the chance to speak with Lani Price (Sal Stowers). Days of Our Lives spoilers say Lani will come face to face with Eli, so DOOL fans can expect some stunning moments.

After following Eli and hoping the trail will lead to Kristen DiMera (Stacy Haiduk), JJ will have a shot at confronting her. During the week of December 9-13, Lani will do her best to stop JJ’s deadly plot. She’ll beg JJ to spare Kristen, who’s become a close friend at the convent. Lani won’t want JJ destroying his own life either, so she’ll push JJ to lower his weapon.

Next, Abigail DiMera (Kate Mansi) will take her mom back to the scene of the crime. She’ll head up to the bistro balcony with Jennifer Horton (Melissa Reeves), but Jenn won’t remember the whole encounter just yet. Later, the walls will close in on “Princess Gina Von Amberg” aka Hope Brady (Kristian Alfonso), so she’ll scramble to preserve her memories as the princess.

“Princess Gina” will consider eliminating Abigail, so that certainly makes it sound like she’ll contemplate murder. However, “Princess Gina” will ultimately decide making her getaway would be better. She’ll plan to flee Salem, but that plan will likely go awry. As for “Princess Gina’s” partner in crime, “Stefano DiMera” aka Steve Johnson (Stephen Nichols) will focus on his own twisted intentions.

Over with Gabi, she’ll get fed up with Chad and try to kick him out of the house. It looks like Chad will refuse to leave, especially since he’s got a revenge scheme in motion. Chad will want to hang in there and see it through.

Other Days of Our Lives spoilers say Ben will have some terrible news to share. He’ll tell Ciara that his legal woes just got even worse. Perhaps Clyde’s attack will somehow come back to bite Ben. Clyde may lie about the incident and make Ben look like he had some blame in their faceoff. Regardless, the last thing Ben needs is to add to his legal problems!

Finally, Mickey will face a medical crisis, which will leave her parents fearful. It won’t be long until Eric and Sarah are grappling with a tough diagnosis. We’ll give you updates as other Days details emerge. Stick with DOOL and don’t forget to check CDL often for the latest Days of Our Lives spoilers, updates and news.