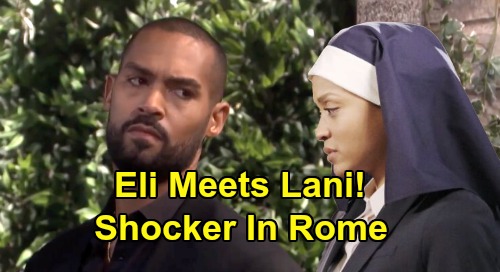 Days of Our Lives (DOOL) spoilers tease that Lani Price (Sal Stowers) will make a confession. Kristen DiMera (Stacy Haiduk) can tell Lani really needs to vent about her troubles. She doesn’t want to be too pushy, but she truly considers Lani a friend by now. They’ve formed a nice bond at the convent, but Kristen still doesn’t know how things went so horribly wrong for Lani.

That’ll change during the week of November 25-29. Days of Our Lives spoilers say Lani will break down and share her secret, which involves Gabi DiMera’s (Camila Banus) ruthless revenge. Lani will tell Kristen all about how Gabi plotted against her after Stefan DiMera’s (Brandon Barash) death. Stefan jumped in front of Lani’s bullet, so it isn’t her fault Gabi lost her husband.

Nevertheless, Gabi blames Lani and formed a vengeful scheme to blow up her relationship with Eli. Days spoilers say Lani will fill Kristen in on Julie Williams’ (Susan Seaforth Hayes) rigged pacemaker. She’ll talk about how she still lives in fear that Gabi will kill Julie.

Kristen will reel once she learns the lengths Gabi went to in her quest for vengeance. Days of Our Lives spoilers say she’ll be completely appalled and will offer Lani some urgent advice. Days of Our Lives spoilers say Kristen will push Lani to return to Salem. She won’t have hope for her own happiness with Brady Black (Eric Martsolf), but she’ll still think Lani can be happy with Eli.

Lani won’t see how as long as Gabi controls Julie’s pacemaker. She’ll worry Eli could lose his grandmother and just won’t know how to fix this. Days of Our Lives spoilers say Lani will contact Abe Carver (James Reynolds), but she’ll remain hesitant to go home. If Lani gets updates on Eli and Gabi’s relationship, that could deter her even more.

However, it looks like destiny will have other plans. Fate just might bring Lani and Eli back together for a surprise meeting. A piazza was mentioned during a recent scene, so it seems Lani and Kristen are at a convent in Italy. We also know Gabi will send her head of security on a mission during the week of December 2-6. There’ll be some situation where Eli has to thwart Chad DiMera’s (Billy Flynn) plan in Rome.

DOOL spoilers say Lani will be floored when she comes face to face with somebody from Salem. Will it be her true love? It certainly sounds like it! Eli may be just as stunned to see Lani in Italy of all places. The fact that she’s a nun now will certainly be a bombshell, too.

Nevertheless, Lani hasn’t made her final vows at the convent yet, so there’s still hope for her future with Eli. It’ll be interesting to see how Lani deals with this meeting and where they go from here. We’ll give you updates as other Days news comes in. Stay tuned to DOOL and don’t forget to check CDL often for the latest Days of Our Lives spoilers, updates and news.