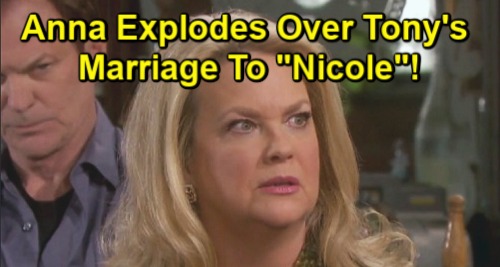 Days of Our Lives (DOOL) spoilers tease that Anna DiMera (Leann Hunley) is in for a shock. DOOL fans know Anna’s been mourning the loss of Tony DiMera (Thaao Penghlis) for years now.

She used to tote Tony’s urn all over the place like it was a beloved pet. Tony was the love of Anna’s life, so imagine her surprise when the news breaks regarding Tony and “Nicole Walker’s” (Arianne Zucker) marriage!

Tony was hesitant to even get on board with this plan because of his own love for Anna. He hates the thought of delivering this devastating blow. Of course, Days of Our Lives spoilers say it may be more infuriating than anything! Anna’s going to want an explanation when she realizes Tony is alive and well. She’ll also wonder why Tony would marry “Nicole” instead of tracking his old wife down.

Will Kristen DiMera Start To Throw Even More Threats Around?

Days spoilers state that Anna will be back in Salem starting on the new Days of Our Lives episode, Monday, August 8, and Tony will want to end this sham marriage the next day. It seems he’ll tell Kristen DiMera (Stacy Haiduk) he wants an annulment for Anna’s sake. Tony may take one look at his true love and decide he can’t bear to be apart from her any longer.

Once Tony provides some form of an explanation, Anna may offer a chance at a reunion. She may push Tony to stop the madness ASAP. Since Tony adores Anna and still wants to be with her, that’s advice he’d take – or at least he’d try to.

Unfortunately, Kristen isn’t the kind of gal who lets allies bail without consequence. She may surely throw more threats around and hope to keep Tony focused.

Brady Black Is Going To Give In To “Nicole Walker” Temptation

Kristen might urge Tony to reunite with Anna as long as he can be sneaky about it. She’ll certainly be reuniting with Brady Black (Eric Martsolf), so Tony might as well!

Days of Our Lives spoilers say Brady will surrender to temptation soon. He’ll hit the sheets with “Nicole” and stop fighting his feelings for Eric Brady’s (Greg Vaughan) sake. Brady will just be fed up and ready to enjoy himself.

It sounds like things are about to get interesting for Tony and Kristen! We’ll give you updates as other Days details emerge. Stick with DOOL and don’t forget to check CDL often for the latest Days of Our Lives spoilers, updates and news.