Days of Our Lives Spoilers: Kate Stunned To See Her Dead Husband – Passes Out In Shock 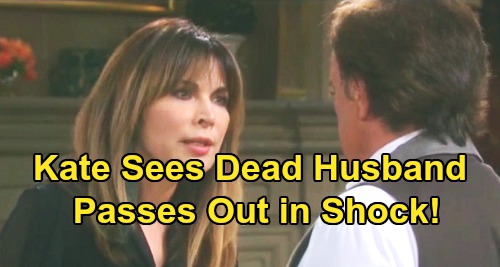 Days of Our Lives (DOOL) spoilers tease that Kate DiMera (Lauren Koslow) will be in for a colossal surprise. As DOOL viewers know, she’s been under a considerable amount of stress in recent days. She was not only kidnapped alongside Ted Laurent (Gilles Marini), but she came face-to-face with Kristen DiMera (Stacy Haiduk), who promptly threatened her life and her children’s lives.

Kristen demanded that both Kate and Ted lie to the cops and say that Stefan DiMera (Brandon Barash) was the mastermind behind their kidnapping and near-starvation. Of course, Kate doesn’t particularly mind lying per se, and she can’t stand Stefan, but she’d rather not be protecting Kristen with her lies. It’s been pretty stressful for her and Ted to keep their stories straight.

Plus, soon Kate will have Hope Brady (Kristian Alfonso) asking a lot of questions and looking into Kate’s assertion that it was Stefan who was behind the kidnapping. It’s going to add more stress to Kate’s life, and she’ll want to come clean and tell the truth, but she’ll remain worried about what Kristen will do if she comes clean.

Kate DiMera Encounters Someone She Thinks Is Dead

And in the midst of all this stress, Kate will encounter someone who will totally blow her mind. Exactly how and where it happens remains to be seen, but Kate will run into Tony DiMera (Thaao Penghlis), who will be back from the dead and very much alive in Salem. As DOOL viewers may know, Kristen just went to see Tony, and she’ll recruit him to help her try to take over DiMera Enterprises.

But that will mean that Tony will need to make himself known around town, and to the DiMera board. Kate apparently won’t be in the know about Tony’s re-emergence in Salem when she bumps into him and gets the shock of her life. Of course, she’ll think that she’s just come face-to-face with Tony’s brother Andre DiMera (Thaao Penghlis), to whom she was married.

Since Andre was killed last year in self-defense by Abigail DiMera (then portrayed by Marci Miller), Kate will be quite stunned to see whom she thinks is Andre. It looks like the shock of seeing “Andre’s” face, coupled with all the stress she’s been under in recent days, will be too much and Kate will promptly faint.

Of course, when she comes to, she’ll probably quickly realize that she’s really looking at Tony, not Andre. But still, she’ll be flabbergasted, since Tony’s supposed to be dead, too! It should be quite the scene as Kate tries to process what she’s seeing and the reality of Tony being alive and well.

Kate will likely be disappointed when she discovers that Andre’s still dead. Despite the terrible things that Andre did before his death, Kate did truly love him!

Are you looking forward to seeing Kate’s big reaction when she thinks she’s seeing her husband Andre? Stay tuned to DOOL and don’t forget to check CDL often for the latest Days of Our Lives spoilers, updates, and news.