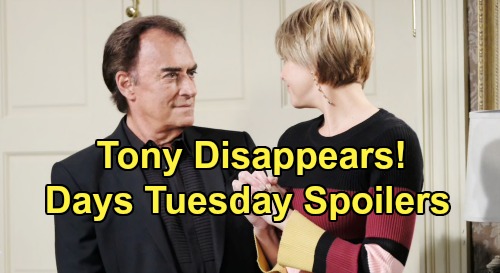 Days of Our Lives (DOOL) spoilers for Tuesday, July 30, tease that Jack Deveraux (Matthew Ashford) will have to make a big decision quickly. He just fired Eve Deveraux (Kassie DePaiva) thanks to her atrocious behavior and their major marriage blowup. Now it’s time to find a suitable replacement for the police commissioner position, and Jack will think he knows the right person for the job.

DOOL fans can expect Eli Grant (Lamon Archey) to get this surprising offer on Tuesday. It won’t be long until he accepts it and spreads the good news. Days of Our Lives spoilers say Rafe Hernandez (Galen Gering) will be taken aback when he gets updates, but he should congratulate Eli on the exciting new gig. As for Lani Price (Sal Stowers), she’ll be absolutely thrilled over her fiancé’s new power.

Other Days spoilers say Jennifer Horton (Melissa Reeves) will have a fierce faceoff with the enemy. She’ll blast Eve for lying to Jack, smashing the serums and shredding the notes that were his last chance at his memories. Of course, we all know Jack will get his memories back anyway. He’s already had some flashes of recognition that connect to his past, so his memories aren’t as buried as he thinks.

It may take some time, but Jack should get back to his old self sooner or later. Finally dumping Eve was a nice start! Elsewhere, Gabi Hernandez (Galen Gering) and Stefan DiMera (Brandon Barash) will have some important tasks to accomplish. They had an argument about the prenup and had to work through the tension, but they’re ready to make this commitment for the sake of DiMera Enterprises.

Gabi naturally has an ulterior motive since she’s plotting to destroy Stefan, but she’ll focus on putting together a fast wedding for now. There’ll be a lot to do as they prepare to tie the knot. They just won’t realize Tony DiMera (Thaao Penghlis) and Kristen DiMera (Stacy Haiduk) will be doing the same thing. It’ll be a wedding planning extravaganza as these determined characters race to the altar.

“Nicole Walker” (Arianne Zucker) will face a scare when Tony suddenly disappears, which will most likely be a cliffhanger on Tuesday. However, Tony turn up eventually and provide a comical explanation. Days of Our Lives spoilers say Kristen and Tony will be able to get their rushed nuptials back on track soon enough.

It sounds like some fantastic scenes are ahead on the NBC soap. We’ll keep you posted as other Days details emerge. Stay tuned to DOOL and don’t forget to check CDL often for the latest Days of Our Lives spoilers, updates and news.