Days of Our Lives Spoilers: Major Cast Member OUT at DOOL – See The Exit Evidence 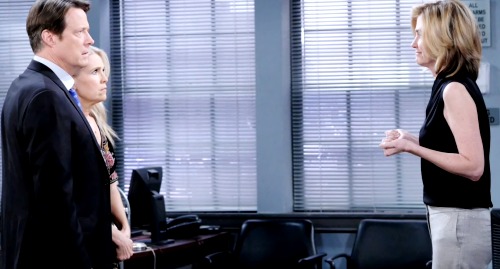 Days of Our Lives (DOOL) spoilers has some news to report about another possible exit from the show. As DOOL viewers know, Olivia Rose Keegan (Claire Brady) recently wrapped her run, and a few others, including Nadia Bjorlin (Chloe Lane), Kyle Lowder (Rex Brady), and Gilles Marini (Ted Laurent) are leaving canvas this summer as well. But could another major DOOL actor or actress be on the way out this coming winter?

Well, according to Jason47 on Facebook, an extremely reliable source, it looks like this may be the case, but it’s unclear exactly who the actor or actress will be. This buzz all started due to a photo that was posted on social media. This photo was taken in the DOOL makeup room, and on the wall of the makeup room is a photo chart showing all of the contract actors. Since Days of Our Lives films six months in advance, that photo chart can provide critical clues about which actors are still with the show in the coming months.

Jason47 took a close look at the photo chart, which is blurry and partially obstructed, and compared it to a previous photo chart, and was able to reach a big conclusion about who’s missing from the new chart.

Here’s what Jason47 reported: “A new photo chart (quite blurry) was seen in the background of a post today from the makeup room. Compared to the most recent chart fans saw of the August/September cast, this new chart has one person missing on the third row.”

Jason continued: “Unfortunately, the phone taking the photo covers that one portion of the photo, so it can’t be determined which actor has left the show. On the August chart (on the left), the third row contained Thia Megia, Matthew Ashford, Kassie DePaiva, and Arianne Zucker. In the new chart (on the right), there is only one photo in between Thia Megia and Arianne Zucker, meaning it is either Ashford or DePaiva who is no longer on contract.”

So, it looks like DOOL could be losing Matthew Ashford (Jack Deveraux) or Kassie DePaiva (Eve Deveraux) in the next few months. Of course, it’s hard to tell exactly where the Eve/Jack storyline will be several months from now, but we do know that it almost certainly looks like Jack will be divorcing Eve sooner rather than later.

And given that Jack will probably embark on a quest to recover his memories somehow, given that DOOL spoilers say that Eve will destroy any chance he has of getting the serum recreated, we’d speculate that it’s much more likely that Matthew Ashford will stick around for a future storyline with Melissa Reeves (Jennifer Horton) than Eve will stick around. But then again, you never know!

You can take a look at the photos that Jason47 compared below and judge for yourself. Do you think that we’ll soon see Matthew Ashford or Kassie DePaiva exit the show? Stay tuned to DOOL and don’t forget to check CDL often for the latest Days of Our Lives spoilers, updates, and news.