Days of Our Lives Spoilers: Are You Tired of Amnesiac Jack, Ready for Him to Dump Eve? DOOL Fans Fed Up 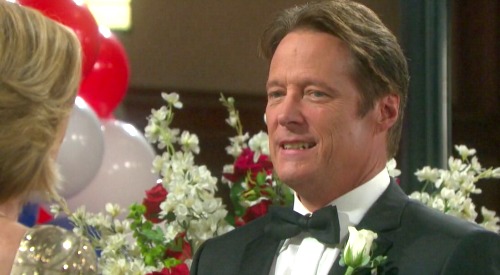 Days of Our Lives (DOOL) spoilers tease that one storyline really seems to be getting fans riled. DOOL fans know that Eve Donovan (Kassie DePaiva) is manipulating Jack Deveraux (Matthew Ashford). He’s become her puppet over the last few months, so some viewers are starting to get fed up.

Jack’s long-awaited return has become a letdown for some Days watchers, so we want you to weigh in. Are you tired of amnesiac Jack? At first, Jack’s lack of memories seemed like a useful tool for angst. It prevented Jack and Jennifer Horton’s (Melissa Reeves) reunion, which gave them something to build to. This story wouldn’t have been as interesting if they immediately got back together.

In fact, Jack and Jenn’s recent flashback-driven show was one of the best Days episodes in a while. It was fun watching Jennifer fight for her man and remembering all the great times they’d shared. Jack even had a minor memory, but he opted to marry Eve anyway. That wouldn’t be such a problem if Jack weren’t such a belligerent monster whenever he’s anywhere near Eve.

Jack fans spent years working on their “Bring Jack Back” campaign, but this probably isn’t what most of them had in mind. Amnesiac Jack is insufferable and Eve’s not any better. It’s obvious that Ashford and DePaiva are having a blast working together, so we can appreciate that part of all this. It’s always nice when costars can have fun on the job.

Nevertheless, many Days of Our Lives fans are frustrated with Jack’s total personality change. Will Horton (Chandler Massey) wasn’t quite himself when he had amnesia, but he was also amusing and sweet – just in a different way. Jack, on the other hand, is full of hate and makes ridiculous spectacles. Everything is a carefully crafted performance that only serves to make him look duped and uncaring.

Eve’s become a witch of a woman lately, so when you pair the two of them up…yeah, it’s easy to see why DOOL viewers are complaining on social media. Days of Our Lives spoilers say Jack will get his memories back eventually, but when? We can only hope we don’t have to suffer through much more of amnesiac Jack. The real deal is what everyone truly wants to see.

Are you tired of amnesic Jack? Are you ready for him to get his memories back and dump Eve? We’ll give you updates as other Days news comes in. Stay tuned to DOOL and don’t forget to check CDL often for the latest Days of Our Lives spoilers, updates and news.