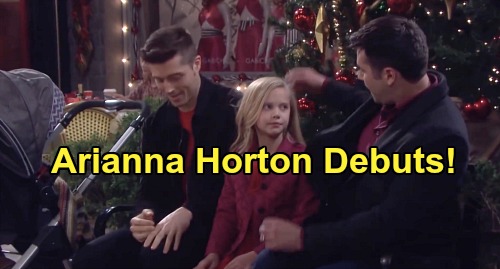 Days of Our Lives (DOOL) spoilers has some news to pass on about an upcoming casting change. Given that storylines on DOOL have advanced by one year, there’s been a need to recast the younger characters on show to “age” them. Most notably, the character of Arianna Horton, who was previously played by 7-year-old twins Harper and Sydnee Udell, has been recast with 9-year-old actress Kingston Foster, who will assume the role for a brief period.

Kingston will be seen on DOOL this week as Arianna. You might recognize Kingston from the Disney movie Zombies. She’s also been on several TV series, including American Horror Story, Fresh Off The Boat, and Fuller House.

Sydney has had several roles since she began acting. She’s appeared on several TV series, including Teachers, Ryan Hansen Solves Crimes on Television, Criminal Minds, and American Housewife. In addition, she’s appeared in the films Ready Player One and Klaus.

Speaking of her most recent film, Klaus, Sydney reported on her Instagram account that she recently attended the premiere for the animated holiday film, which was released in select theaters on November 8th and will be released on Netflix on November 15th.

She posted a photo of herself at the premiere along with the following caption: “My first movie premiere was a dream come true. I had the best time! #klausnetflix Thank you @netflix for an amazing event. So grateful to be a part of the @netflix family! Thank you to my amazing team @susanossertalent @cleartalentgroup I couldn’t do it without you!”

We look forward to seeing Kingston, and then Sydney, on DOOL as Arianna! Stay tuned to DOOL and don’t forget to check CDL often for the latest Days of Our Lives spoilers, updates, and news.

Peaceful mind, grateful heart♥️ What are you grateful for?