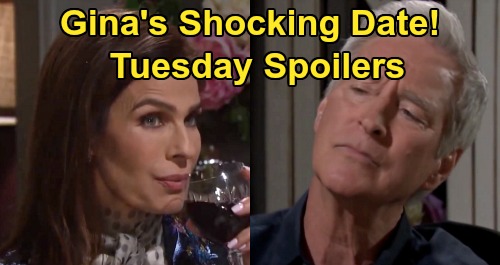 Days of Our Lives (DOOL) spoilers for Tuesday, November 12, tease that Sonny Kiriakis (Freddie Smith) will get to know someone new in town. It turns out Rafe Hernandez (Galen Gering) recently hired a nanny for David Ridgeway. His name is Evan (Brock Kelly), and he’ll soon serve as a sympathetic ear for Sonny.

Of course, Days just revealed Will Horton (Chandler Massey) is behind bars with Ben Weston (Robert Scott Wilson). Sonny’s clearly dealing with a lot, so Evan can be a shoulder to cry on in the coming months. For now, it looks like Sonny and Evan will just hit things off. They’ll enjoy a nice chat, which will lay the groundwork for their close bond to come.

Meanwhile, DOOL fans can catch up with Ciara Brady (Victoria Konefal). Due to the time jump, we’ve skipped watching Ciara learn the ropes at Titan Industries. She’s currently a successful executive, so Victor Kiriakis (John Aniston) will be proud of her on Tuesday. They’ll have a conversation about Ciara’s career as well as Ben’s predicament.

Days of Our Lives spoilers say Ciara will make a bold declaration. She’ll insist she’s given up on Ben, but has she really? It’s possible Ciara will be playing Victor for Ben’s sake. We know Ben didn’t kill Jordan Ridgeway (Chrishell Hartley), so who’s responsible? Ciara would have a good reason to suspect Victor, who certainly wanted Ben away from his granddaughter.

There’s a good chance a more shocking suspect will emerge down the road, but Victor could definitely be on Ciara’s radar at the moment. Whatever the case, Ciara will do some investigating in the coming weeks. Let’s hope she can uncover some new evidence and get Ben off the hook!

Elsewhere, Princess Gina’s (Kristian Alfonso) stunning new companion will be revealed. Days of Our Lives spoilers say that may be Stefano DiMera – at least a version of him. Joseph Mascolo has passed away, but Princess Gina is talking to “Steffie” in the show’s winter promo. However, only Stefano’s hand can be seen. Some complicated layers will be peeled back in this storyline, so don’t miss what’s in store.

Finally, Jack Deveraux (Matthew Ashford) will tell Jennifer Horton (Melissa Reeves) who’s in prison for her attempted murder. Eve Donovan (Kassie DePaiva) is in the slammer with Hattie Adams (Deidre Hall), so it seems she went down for pushing Jenn off that balcony. Days of Our Lives say the truth should come out eventually, but Eve will be stuck at Statesville for now.

It sounds like some great drama’s coming up. We’ll give you updates as other Days news emerges. Stay tuned to DOOL and don’t forget to check CDL often for the latest Days of Our Lives spoilers, updates and news.