Days of Our Lives Spoilers: Baby David’s Nanny Evan, Trouble For Sonny and Will – Salem Love Triangle After Time Jump 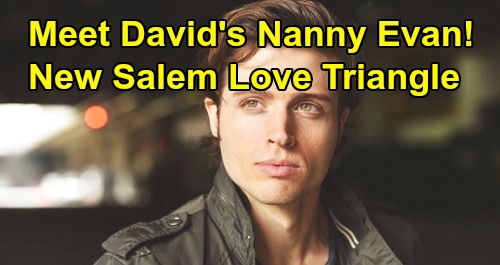 Days of Our Lives (DOOL) spoilers tease that viewers will be seeing a new character after the big DOOL time jump. As you’re probably aware by now, DOOL is planning to advance storylines by a year on the episode airing on Friday, November 8th.

A lot will have happened in that year for all the characters, but for viewers the time jump will happen suddenly, and storylines will instantly pick up one year later.

Well, once things pick up after the time jump, DOOL viewers will see a new character emerge on the Salem scene. According to DOOL spoilers, Jordan Ridgeway (Chrishell Hartley) will be found dead shortly before the time jump, and this will have all sorts of implications for what happens in the future for several DOOL characters. It’s certainly looking like Ben Weston (Robert Scott Wilson) will be arrested for Jordan’s murder, which will be a huge storyline in its own right.

David Ridgeway Will Stay With Rafe Hernandez After Mother’s Death

And we also have to remember that Jordan will be leaving a young son, David Ridgeway (Jaxton and Dexter Ellis) behind. It appears that David will remain with Rafe Hernandez (Galen Gering) after Jordan’s death and he’ll raise the little boy on his own. But since he’ll need some assistance as a single dad, he’ll hire a nanny, who will wind up being named Evan and played by Brock Kelly.

Long-time DOOL viewers might remember Brock Kelly, as he portrayed a character named Josh on the show for several episodes back in 2005-2006. He also appeared in one episode of Y&R back in 2004, so he’s not new to daytime TV, but the role of Evan the nanny on DOOL will be his first major daytime role.

You might also recognize Brock from the TV Series called Ravenswood, in which he portrayed the character of Zach Springer for several episodes. He’s also appeared in various films, including Pitch Perfect and American Beach House.

New Love Triangle For Sonny Kiriakis And Will Horton Coming?

At any rate, Brock’s DOOL character Evan will be Rafe’s nanny after the time jump, and he’ll care for David – who will now be a toddler – on a regular basis. According to DOOL spoilers, he’ll meet Sonny Kiriakis (Freddie Smith) as the two characters get acquainted with each other. It’s possible that Evan might end up being a potential love interest for Sonny and someone who could come between Sonny and Will Horton (Chandler Massey).

Could we be seeing a new love triangle between Sonny, Will, and Evan? It would certainly shake things up if a hot new guy befriends Sonny and makes Will jealous. We’ll see what happens here and who Evan ends up interacting with most on the Salem scene.

Are you looking forward to seeing Evan on the Salem scene? Stay tuned to DOOL and don’t forget to check CDL often for the latest Days of Our Lives spoilers, updates, and news.