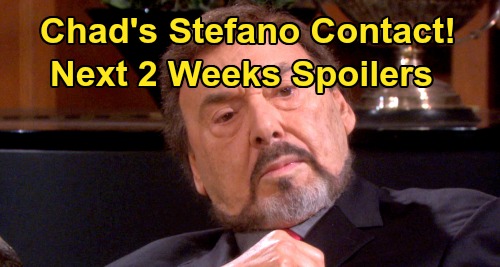 Days of Our Lives (DOOL) spoilers for the next two weeks tease that things are about to heat up in Salem. During the week of November 4-8, Lani Price (Sal Stowers) will call off the wedding in front of all the guests. Eli Grant (Lamon Archey) will be baffled when Lani dumps him at the altar and even more confused once he catches up with her. Lani will insist she doesn’t love Eli anymore, but he just won’t see how that’s true.

After all, Eli and Lani have been on cloud nine lately – at least until Gabi DiMera (Camila Banus) chose to rain on their parade! Days spoilers say Lani will track Gabi down later and sock her right in the kisser. Her punch should sting, but Gabi won’t regret the suffering she’s caused. As for Ben Weston (Robert Scott Clifton), he’ll find himself in a tight spot when he’s accused of Jordan Ridgeway’s (Chrishell Hartley) murder.

After Jennifer kerplunks into the town square, she’ll undergo surgery at the hospital. Jennifer’s life will be spared, but she’ll remain in a coma. On November 8, DOOL’s 54th anniversary will bring a time jump that leaps everyone ahead one year. During the week of November 11-15, we’ll see some huge changes in Salem.

For starters, Ciara Brady (Victoria Konefal) – Ben’s previously ardent defender – will announce she’s given up on him. She’ll let Victor Kiriakis (John Aniston) know she’s lost all hope and is moving on. Meanwhile, Ben will be stuck behind bars – most likely for a crime he didn’t commit.

As for Kayla Johnson (Mary Beth Evans), her last name won’t be Johnson anymore. Kayla should be divorced by then and headed home for a night of romance with a new flame. Speaking of new flames, Sonny Kiriakis (Freddie Smith) may be on the verge of one. He’ll meet Evan (Brock Kelly), Rafe Hernandez’s (Galen Gering) new nanny, and presumably hit things off with him.

Since Sonny and Will Horton (Chandler Massey) are currently happy, that’s a tell-tale sign of trouble after the jump. It seems Sonny will be ready to play the field again after some drama that’s transpired. That drama will most likely be connected to Adrienne’s death, which there’s been strong Days buzz about.

Over with Chad DiMera (Billy Flynn) and Abigail DiMera (Kate Mansi), Days of Our Lives spoilers say they’ll make their way back to town. Later, Chad will make a surprising confession to Abigail. He’ll admit he’s been in contact with Stefano DiMera (Joseph Mascolo), so it’ll be interesting to see what messages they exchanged and if the implication is that Stefano is alive.

It sounds like this time jump will bring some crazy scenes! We’ll give you updates as other Days news comes in. Stay tuned to DOOL and don’t forget to check CDL often for the latest Days of Our Lives spoilers, updates and news.