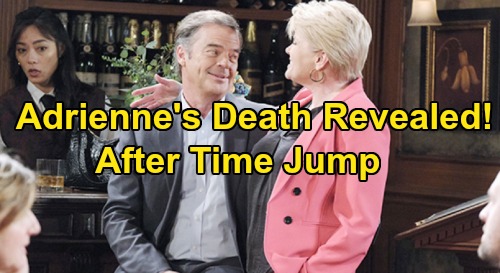 Days of Our Lives (DOOL) spoilers tease that a shocking death will be revealed after the time jump. This one is separate from the demise that happens beforehand. We know Ben Weston (Robert Scott Wilson) will land behind bars for Jordan Ridgeway’s (Chrishell Hartley) murder – although a more surprising culprit will probably be behind it. However, this is a different death that’ll happen offscreen during the year fans miss.

During the week of November 11-15, DOOL viewers will learn who died and see how it’s affected this person’s loved ones. Based on all the clues out there, Adrienne Kiriakis (Judi Evans) is likely a goner. There’s been plenty of buzz about Adrienne passing away, and it makes sense considering this proposal came out of nowhere.

Adrienne and Justin Kiriakis (Wally Kurth) haven’t been key players in Salem in quite some time. They’re rarely even on, so it’s suspicious for Justin to suddenly pop the question and tie the knot with Adrienne. Days spoilers say Justin and Adrienne will indeed wed during the week of November 4-8. So will Jennifer Horton (Melissa Reeves) and Jack Deveraux (Matthew Ashford), but their world will be torn apart soon after.

Jennifer’s terrible fall will put her in a coma before the jump, so it’s smart to save Adrienne’s drama and let it happen offscreen. After all, the time jump has to deliver some bombshells! There’s no point in doing this if we aren’t caught off guard by the massive changes in town.

Wally Kurth is back on contract and will be involved in one of the most gripping stories he’s ever played. That has to be dealing with grief over Adrienne’s death, right? All the puzzle pieces fit here. Judi Evans can always play Bonnie Lockhart down the road – or even back-from-the-dead Adrienne. This is Salem, where death isn’t really a permanent thing.

Nevertheless, Days of Our Lives spoilers say this demise should stick for now and will affect many Salemites. Word has it Sonny Kiriakis (Freddie Smith) and Will Horton (Chandler Massey) may split after this devastating loss. Mourning can be difficult anyway, but there may be other factors that pile on.

Regardless, it’s good to at least have confirmation on a Days death in general. You can count on someone’s demise to be revealed during the week of November 11-15 for sure. As for it being Adrienne, that seems like a pretty safe bet, too.