BY hellodrdavis on November 11, 2019 | Comments: one comment
Related : Days of Our Lives, Soap Opera, Spoiler, Television 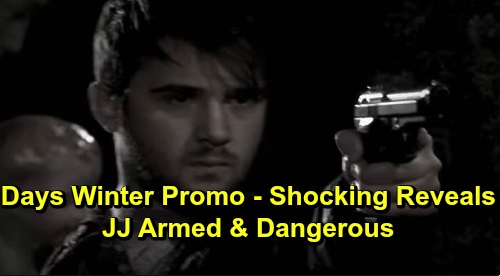 Days of Our Lives (DOOL) spoilers winter preview teases that viewers can expect some big changes on the show in the days to come. In a previous post, we covered some of the bombshells in the new DOOL winter promo, and now we’d like to address the remaining aspects of the promo for you. The promo covers what viewers can expect to be happening in Salem after the time jump, when the drama picks up during the week of November 11, 2019. There’s a lot going on, so let’s dive right in!

DOOL viewers can expect some big changes in several DOOL couples. First off, the promo is clear that Eli Grant (Lamon Archey) is now in a romantic relationship with Gabi DiMera (Camila Banus), as the two are shown kissing and preparing for a sensual bubble bath. But what about Lani Price (Sal Stowers)? In the promo, Abe Carver (James Reynolds) tells Eli that Lani is “gone” while Lani is shown alone and looking sad. Could Lani have left Salem?

Next, Sonny Kiriakis (Freddie Smith) is shown confiding to Rafe Hernandez (Galen Gering) that he misses someone (who is a “he”) very much. This suggests that either Sonny and Will Horton (Chandler Massey) aren’t together, or that they are experiencing problems and that Sonny misses the closeness that he and Will used to share. We should note that Will and Sonny are also shown together in the promo with an aged Ari Horton (Sydney Brower), so Will is definitely still around.

Finally, Kayla Johnson (Mary Beth Evans) is shown in the promo with a man’s hand on her shoulder, in an apparent loving gesture. According to DOOL spoilers, Kayla will have quit waiting for Steve Johnson (Stephen Nichols) and will have moved on to a new romance – and DOOL buzz is that this will be with Justin Kiriakis (Wally Kurth). This is a big status change, but the promo also shows Kayla encountering a man in a Santa suit and beard and asking if he’s Steve.

We should note, though, that the man in the Santa suit, while he generally resembles Steve, is not wearing a patch, which Kayla can’t see from her vantage point in the scene. So, it doesn’t look like the man is Steve, and that means that Kayla will likely be reunited with Steve in a different way when he reappears on the scene. He’s currently scheduled to reappear on the show on Wednesday, November 27th, but viewers will have to wait to see how that comes about.

As DOOL viewers know, both Kristen DiMera (Stacy Haiduk) and Sarah Horton (Linsey Godfrey) were newly pregnant at the time of the time jump. The promo clearly shows Kristen and Brady Black (Eric Martsolf) happy with their new baby, and it also shows Sarah and Eric Brady (Greg Vaughan) with a baby girl who’s a bit older than a newborn. Eric tells Sarah that “she’s beautiful, just like her mother.”

But we should caution that the happy family scenario involving Eric and Sarah could be a fake-out or a dream on Sarah’s part, as she’s also shown at a later point in the promo in a passionate kiss with Xander Kiriakis (Paul Telfer). Days of Our Lives spoilers also indicate that Nicole Walker (Arianne Zucker) and Eric will still be together after the time jump, so viewers will have to wait to see exactly what’s going on here.

Next, the promo addresses some employment status changes for several DOOL characters. Ciara Brady (Victoria Konefal) is shown looking very corporate-ish and talking with Victor Kiriakis (John Aniston) at the Kiriakis mansion. Victor tells Ciara that she’s the future of the family, and she agrees wholeheartedly, so it looks like she might have taken a big role in Titan. As DOOL viewers will remember, Victor had been wanting Ciara involved in the family business, so it looks like he got his wish.

It also appears that Nicole is working at Titan as well, as she’s shown in what looks to be the Titan offices in corporate attire with Xander, who looks equally formal in a suit and glasses. Nicole doesn’t look particularly happy to be there with Xander, so there may be more to that story that viewers will soon learn.

Next, Abby DiMera (Kate Mansi) is shown with her dad Jack Deveraux (Matthew Ashford) talking about her new career – as Jack’s #1 reporter! That can only mean one thing – that Jack has taken over the Salem Spectator once again, and that Abby is on staff there and going a great job.

Finally, in a humorous turn, Kate DiMera (Lauren Koslow) is shown in the promo doing something completely uncharacteristic for her…waiting tables at The Brady Pub. She’s shown with a notepad ready to take Kayla’s order, much to Kayla’s surprise. Does this mean that Kate was ultimately shut out of both DiMera Enterprises and Titan Industries? And even if she was, it seems that she’d be able to get a more high-powered job than working at the pub, so there must be a good story here.

A final development in the DOOL winter promo involves JJ Deveraux (Casey Moss). Whether he’s still happily with Haley Chen (Thia Megia) is not addressed, but he’s shown clearly distressed and pointing a gun at someone, and the promo suggests that it could be Ciara, as she’s shown in a flash just before JJ is shown pointing the gun.

We should also note that ongoing DOOL spoilers indicate that Eric will soon discover that JJ is high, and soon thereafter JJ will explode at Brady, so that in combination with JJ shown welding a gun in the promo indicates that JJ’s having some serious life difficulties. DOOL viewers will remember that JJ previously had problems with drugs, so it seems that he’ll be facing that issue again.

That does it for the DOOL winter promo! It looks like we’re in for an action-packed winter, so stay tuned! We’ll give you updates as DOOL news comes in. Stick with the NBC soap and don’t forget to check CDL often for the latest Days of Our Lives spoilers, updates, and news.