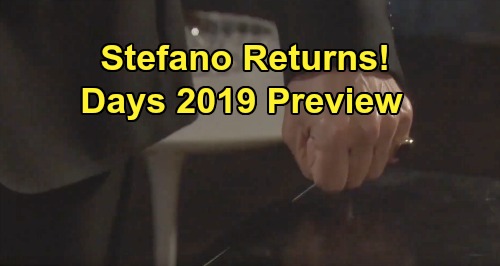 Days of Our Lives (DOOL) spoilers tease that viewers are in for some exciting drama in the days to come. As you are probably aware, DOOL has embarked on a first in daytime – storylines have advanced one year into the future, and starting on the episode airing on Monday, November 11, 2019, viewers will see a very different Salem. The new DOOL promo is all about what will be happening in Salem when the drama picks up on Monday’s episode.

It’s a promo packed full of interesting tidbits about what life in Salem will be like going forward. Here, we cover four explosive bombshells in the promo, and we’ll address other key elements of the promo in another post. Let’s get right into it!

First off, the promo addresses a huge comeback that viewers might have thought wasn’t even possible – the return of Stefano DiMera! Of course, Stefano was previously portrayed by Joseph Mascolo, who sadly passed away several years ago. The promo shows a man’s hand holding a cigar over a chess board, clearly intended to be Stefano, with Princess Gina Von Amberg (Kristian Alfonso) in the same room asking the man, “What do you think, Steffy?”

Now, this could indicate a recast of the role made famous by Joseph Mascolo, or it could simply be a situation where viewers never actually see the face of the character, but just see the hand and essence of the man. It’s unknown at this point whether TPTB are planning to or have recast the role, but it’s clear from the promo that the character of Stefano is very much real and interacting with other characters.

The promo also shows Chad DiMera (Billy Flynn) telling Abby DiMera (Kate Mansi) that “I’m absolutely sure that this is my father.” That would indicate that Chad has had contact with Stefano but hasn’t necessarily laid eyes on him yet, which would certainly be an interesting situation. That would mean that perhaps Princess Gina, and likely Wilhelm Rolf (William Utay), have seen Stefano while others on canvas haven’t.

At any rate, the promo is clear that Stefano is back and in action but leaves open the question of whether viewers will ever see a face to the man, hear his voice, or be asked to accept a recast.

In another surprising turn, Eve Donovan (Kassie DePaiva) is shown in the promo in prison, with Hattie Adams (Deidre Hall) as her cellmate. That can only mean one thing – that Eve was falsely convicted of pushing Jennifer Horton (Melissa Reeves) over the balcony at the bistro. As DOOL viewers will remember, it was actually Princess Gina who pushed Jen to her near-death after her wedding to Jack Deveraux (Matthew Ashford).

But earlier, at Jack and Jen’s wedding, a very drunk Eve interrupted the ceremony and made a horrible scene. Last viewers saw Eve, she was back at her hotel room alone, but it’s easy to see how she might have been falsely accused of the crime. If the police found out from surveillance video at the bistro that the person who pushed Jen was a woman, and Eve couldn’t account for her whereabouts because she was intoxicated and alone, then that could easily result in her conviction.

At any rate, the promo shows Eve in prison interacting with Hattie, who tells Eve that “I’m the best friend you’ve got!” Of course, Eve could have an interesting prison existence with Hattie as a cellmate, but she might not remain in prison much longer, now that Jen is awake. In the promo, a now-awake Jen says that she thinks she was pushed, so it sounds like her memory for the crime won’t be clear, at least at first.

But when Jen’s memory returns, Eve should be cleared and ultimately released. But until then, it looks like she’s stuck with Hattie, which should lead to some humorous moments for viewers.

Ben In Prison For Jordan’s Murder

There will be more prison drama, as the promo shows Ben Weston (Robert Scott Wilson) in prison as well. DOOL viewers will remember that before the time jump, Ben found a woman’s body in the gatehouse, which will turn out to be that of his sister, Jordan Ridgeway (Chrishell Hartley). It certainly looks like Ben went down for the murder of his sister, which can only mean a set-up of some sort, since viewers know that Ben didn’t commit the crime.

But while in prison, Ben will encounter an all-too-familiar face – that of his father, Clyde Weston (James Read). Clyde and Ben are shown in the promo in what appear to be adjacent cells, with Clyde saying, “I thought I’d come keep you company. Good to see you again, son!” However, Ben doesn’t look too thrilled to see his father, although it appears that he may be forced into a conversation.

It also seems that Ben and Ciara Brady (Victoria Konefal) will still be together as a couple, although Ciara may be on the verge of cutting Ben loose. According to DOOL spoilers, Ciara will soon tell her grandfather Victor Kiriakis (John Aniston) that she’s about to give up on Ben. That should be an interesting conversation, especially since the most likely person to have framed Ben for Jordan’s murder would be Victor himself.

Finally, the new DOOL promo shows a clearly distraught and crying Justin Kiriakis (Wally Kurth). We know from ongoing DOOL spoilers that Justin is or was going to be seriously rattled by a tragedy, and given that Adrienne Kiriakis (Judi Evans) is nowhere to be found in the promo, it’s looking like Adrienne will have died during the time jump year.

Of course, DOOL viewers know that Justin and Adrienne were married right before the time jump, so for Adrienne to have died is particularly tragic. The circumstances surrounding her death remain a mystery at this point, but that should be explained soon enough.

There’s also been buzz that Justin and Kayla Johnson (Mary Beth Evans) will be a romantic item going forward, and the promo certainly alludes to Kayla being with someone new, as she’s shown with a man’s hand on her shoulder, which is clearly a romantic gesture.

It certainly looks like we’re in for some exciting (and some tragic) developments coming up soon, so you’ll want to stay tuned! We’ll give you updates as DOOL news comes in. Stick with the NBC soap and don’t forget to check CDL often for the latest Days of Our Lives spoilers, updates, and news.