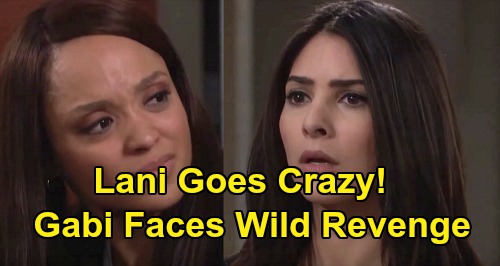 Days of Our Lives (DOOL) spoilers tease that Lani Price (Sal Stowers) will lose it over her destroyed life. She was just doing her job the night Stefan DiMera (Brandon Barash) chose to dive in front of his criminal mother. Stefan saved Vivian Alamain (Robin Strasser), but he got himself shot as a result. It certainly wasn’t Lani’s fault, but Gabi DiMera’s (Camila Banus) making her suffer anyway.

During the week of November 11-15, we’ll see some interesting post-time jump developments. Gabi’s relationship with Eli Grant (Lamon Archey) should be one of them. She’s already been inserting herself in Eli’s world again and offering comfort.

Gabi was also quick to badmouth Lani and suggest that Eli was too good for her. She’s moving in for the next blow, so “Geli’s” reunion should be solid after the jump. Of course, Days fans won’t have seen Gabi winning Eli over and rebuilding this romance. Lani’s initial reaction to it will have happened offscreen as well.

That’ll be important since Lani apparently couldn’t handle her enemy taking her man. Days of Our Lives spoilers suggest Lani will take a crazy turn after the time jump. There are levels to crazy in Salem, so there’s no word on that that’ll mean exactly.

However, Lani’s sporting a pretty wild look in DOOL’s fall promo. We may be dealing with an alternate personality situation – kind of like when Abigail DiMera (Kate Mansi) was “Gabby.” Then again, it could just be Lani’s new version of herself. Whatever the case, Lani will likely be out for revenge. That could put Gabi in a tight spot and leave to danger for other characters, too.

Days of Our Lives spoilers say Julie Williams’ (Susan Seaforth Hayes) pacemaker will suddenly leave her heart racing. It doesn’t seem like Gabi would have any reason to do that. She’ll have the upper hand along with Eli as her beau. Messing with Julie’s pacemaker after jumping forward a year wouldn’t really benefit Gabi – Lani could frame Gabi for the new pacemaker trouble Julie is going to have!

Lani wouldn’t mess with that pacemaker in her right mind, but she might if she wasn’t quite herself. She could become a version of “Gabby” or another alter who’s willing to play dirty. Gabi will fear Chad DiMera’s (Billy Flynn) plotting vengeance – and he definitely could be after everything Abigail went through. Even so, there’s a chance Lani will be the one plotting – or could at least form a plot of her own.

Gabi’s downfall is still to come, so don’t miss what’s in store. We’ll give you updates as other Days news emerges. Stay tuned to DOOL and don’t forget to check CDL often for the latest Days of Our Lives spoilers, updates and news.