BY hellodrdavis on November 9, 2019 | Comments: one comment
Related : Days of Our Lives, Soap Opera, Spoiler, Television 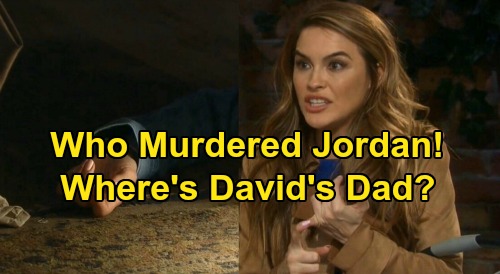 Days of Our Lives (DOOL) spoilers tease that Ben Weston (Robert Scott Wilson) got a big shock when he found a woman’s dead body in the gatehouse. Of course, this occurred right before the DOOL time jump, so when the show picks back up on Monday, November 11, viewers will find out what happened in the aftermath of Ben’s discovery. DOOL spoilers indicate that the body Ben found will be that of his sister, Jordan Ridgeway (Chrishell Hartley).

Jordan’s death brings some big questions that DOOL will need to explain. First off, who caused her death? DOOL spoilers indicate that Ben will have been arrested for Jordan’s murder, which means that someone must have found him with the body and jumped to the wrong conclusion. Viewers know that Ben didn’t kill anyone and was in fact very upset when he discovered the body. And if Ben ends up being convicted and going to prison, then that could indicate a setup.

We can’t forget that Victor Kiriakis (John Aniston) was seriously considering eliminating Ben from Ciara Brady’s (Victoria Konefal) life, so he’s certainly someone with a motive for setting up Ben. Plus, Victor knew that Jordan was a threat to Ciara as well, so he could have arranged for Jordan to be killed and Ben to be framed for the murder. We’ll see what happens here, but if Ben did any time in prison (or if he’s still in prison), then a setup seems likely.

Next, what will have happened with Jordan’s son, David Ridgeway (Dexter and Jaxton Ellis) after her death? The little boy will have grown considerably in a year, and he should be a toddler when viewers see him next. DOOL spoilers say that he’ll be living with Rafe Hernandez (Galen Gering), who had legal custody of him along with Jordan at the time of her death.

Rafe will have help in caring for David, as he’ll have hired a nanny over the course of the time jump year. DOOL viewers will see a new character named Evan (Brock Kelly) taking care of David on a daily basis while Rafe is at work. But there will be one important piece of the David puzzle that may still be unanswered even after the time jump, and that’s the issue of David’s biological father.

DOOL viewers will remember that Rafe attempted to ask Jordan about David’s father in the weeks leading up to her death, but Jordan was adamant that his father wasn’t the kind of person that she wanted to be around David. She never gave up the father’s identity, so one wonders whether this will ever be revisited on the show. It would be just like DOOL to have the bio dad come back on the scene and threaten to take David away from Rafe.

At any rate, it will be interesting to see how Days addresses these questions going forward. The time jump will provide the opportunity for some creative storytelling, and viewers might not get answers to exactly what happened to Jordan and what’s gone on with her son during the missing year right away. It could take some time for the details to all come out, and viewers may have to be patient.

Who do you think killed Jordan? And do you think we’ll ever find out who David’s father is? Stay tuned to DOOL and don’t forget to check CDL often for the latest Days of Our Lives spoilers, updates, and news.