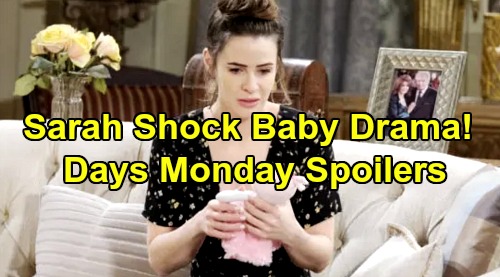 Days of Our Lives (DOOL) spoilers for Monday, November 11, tease that the time jump will bring a mixture of the past and the new present. Jack Deveraux (Matthew Ashford) just told Jennifer Horton (Melissa Reeves) that she’d been in a coma for an entire year, so the long-awaited twist has finally happened. Of course, there are still some loose ends to tie up from the year before in Salem.

For starters, let’s talk about Ben Weston’s (Robert Scott Wilson) horrifying discovery. Thanks to victim’s fingernails and denim jacket, Ben naturally assumed Ciara Brady (Victoria Konefal) was dead on the floor. He broke down in tears when he felt how cold the woman was, but we know this isn’t Ciara thanks to other Days of Our Lives spoilers. She’ll remain very involved in the story moving forward.

Comings and goings info reveals Jordan Ridgeway’s (Chrishell Hartley) stint is over, so it seems she was the victim instead. DOOL fans can expect flashbacks to explain the situation on the new Days episode Monday, November 11. Ben will be overcome with emotion as he’s reunited with Ciara. Of course, he’ll also be torn about his sister’s death. Ben loved Jordan and knows she genuinely needed help, so he’ll be heartbroken that it had to turn out this way.

Unfortunately, we’ll flash back to the future and most likely learn Ben wound up behind bars. He clearly didn’t kill Jordan, but it looks like he’ll be convicted of the crime anyway. Days of Our Lives spoilers say Ben will open up to someone shocking, so that may be another inmate. It’ll be interesting to see which Salemite will serve as Ben’s confidant.

Over with Sarah Horton (Linsey Godfrey), the outcome of all her baby drama will bring some surprises. Eric Brady (Greg Vaughan) just found out Sarah is pregnant, and Nicole Walker (Arianne Zucker) confirmed Kristen DiMera’s (Stacy Haiduk) claims. The good news is this round of deception won’t destroy “Ericole.” The bad news is the next round of deception just might!

Nicole will be keeping some new secrets along with Sarah thanks to the one-year leap. Sarah will indeed have a baby, but will it be hers or was that baby switched with Kristen’s? It’ll be a while before Days fills everyone in on the rest of the story.

In the meantime, Jennifer will enjoy a wonderful reunion with Abigail DiMera (Kate Mansi) and JJ Deveraux (Casey Moss). Jack will love seeing the whole Deveraux family back together. They’ll all share a warm moment, but some troubling issues will be revealed for JJ later this week.

Chad DiMera (Billy Flynn) will also be back in town on Monday, so viewers can catch up with “Chabby” and see what their plans are moving forward. We’ll give you updates as other Days details emerge. Stay tuned to DOOL and don’t forget to check CDL often for the latest Days of Our Lives spoilers, updates and news.