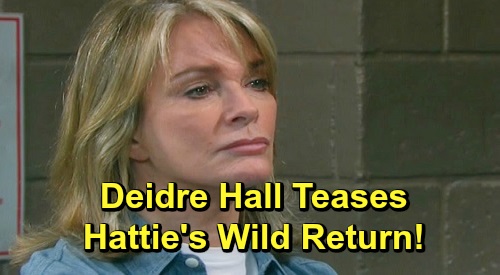 Days of Our Lives (DOOL) spoilers tease that the controversial time jump will bring a Salem overhaul. Following the November 8th leap, we’ll see tons of changes during the week of November 11-15. Many Days fans are concerned about their favorite pairings and don’t love the idea of skipping a whole year. However, there’s a beloved cast member who’s voicing her support for what she calls a “fun” twist.

DOOL viewers know Deidre Hall as the pragmatic yet lovable Dr. Marlena Evans. Marlena is a soap staple and will be featuring in some huge storylines soon enough. In an interview with TV Guide, Hall talked about the time jump and offered hints on what to expect. She feels like this will ultimately be a good thing, especially since the rushed future will provide some callbacks to the past.

“It’ll shake things up,” Hall promised. “It will remind people of things that used to be going on [in Salem].” Of course, there are also some big returns to look forward to. Days of Our Lives fans can expect to see Chad DiMera (Billy Flynn), Abigail DiMera (Kate Mansi), Steve Johnson (Stephen Nichols), Clyde Weston (James Read) and more.

Hall also assured everyone that some great stuff’s ahead from Hattie Adams (Deidre Hall). Marlena’s hilarious lookalike will be back on the scene to stir up trouble and provide the usual funny moments. “The more reined in that Marlena is, the more unbridled that Hattie is,” Hall teased. It should be interesting to see what predicaments Hattie lands in during her next stint.

As for “Jarlena,” Days of Our Lives spoilers say the couple will survive the time jump. They’ll still be on solid ground, but another character will indeed try to meddle in their romance. Hall feels like Marlena and John Black (Drake Hogestyn) can never really be torn apart. Even so, they’re going to face some obstacles in the coming months.

“You can’t get in between them…but somebody tries,” Hall admitted. Naturally, Hall’s referring to Princess Gina (Kristian Alfonso), who’s in love with John and will make some bold moves after the time jump. Marlena will throw off Princess Gina’s plans during the week of November 18-22, but for how long?

As Princess Gina grows impatient, Marlena could land in grave danger. Just look at what happened to Jennifer Horton (Melissa Reeves)! No one who stands in Princess Gina’s way fares well. Days spoilers say some exciting scenes are coming up. We’ll give you updates as other news emerges. Stay tuned to DOOL and don’t forget to check CDL often for the latest Days of Our Lives spoilers, updates and news.