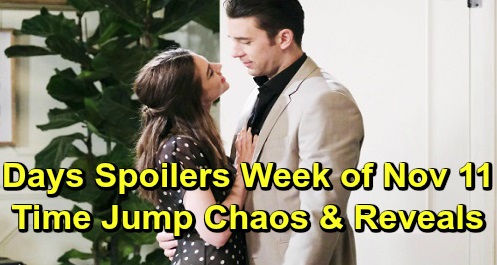 Days of Our Lives (DOOL) spoilers for the week of November 11-15 tease that things are about to heat up in Salem. After the time jump on November 8, we’ll see major drama unfold one year later. The week ahead will kick off a new chapter that’s full of twists and stunning revelations.

First, there’ll be a shocker that relates to Sarah Horton (Linsey Godfrey) and her baby. Both Sarah and Nicole Walker (Arianne Zucker) will have some secrets, and those secrets could have a huge impact on all the key players here. As for Kristen DiMera (Stacy Haiduk), she’ll reflect on a significant incident that caused her to leave town.

Brady Black (Eric Martsolf) will reflect on his own struggles, which undoubtedly relate to Kristen and the baby. Days of Our Lives spoilers say flashbacks will be part of this time jump, so this would be a good place to insert some. DOOL’s being hush-hush about all the details, but this baby storyline will slowly fall into place.

Meanwhile, Abigail DiMera (Kate Mansi) and Chad DiMera (Billy Flynn) will return to Salem. Jennifer Horton (Melissa Reeves) will awaken from her coma and learn the person who pushed her is behind bars. The problem is the cops will have the wrong culprit! “Hope Brady” aka Princess Gina (Kristian Alfonso) will be busy trying to nail down a relationship with John Black (Drake Hogestyn), so she won’t be in prison.

Eve Donovan (Kassie DePaiva), on the other hand, could easily land in a cell after false allegations. Whatever the case, Jack Deveraux (Matthew Ashford) will be relieved once Jenn finally opens her eyes. JJ Deveraux (Casey Moss) will be relieved as well, but he’ll still have a battle he’s facing. He’ll explode at Brady and will later get called out for being high.

Eric Brady (Greg Vaughan) will grow concerned about JJ and will try to help if he can. Back with Abigail, she’ll be surprised by Chad’s admission. It turns out Chad’s been in touch with Stefano DiMera (Joseph Mascolo), so that’ll throw Abigail for a loop.

Next, Days of Our Lives spoilers say Gabi DiMera (Camila Banus) will face some suspicions. She’ll tell Eli Grant (Lamon Archey) – who will almost certainly be her boyfriend – that she believes Chad’s scheming against her. A wild shocker involving Lani Price (Sal Stowers) is also coming up, so that could affect Gabi as time goes on.

Other Days of Our Lives spoilers say Sonny Kiriakis (Freddie Smith) will meet Evan (Brock Kelly), who’ll be serving as a nanny to David Ridgeway. Rafe Hernandez (Galen Gering) hunky new hire will likely hit it off with Sonny right away. There’s a good chance Sonny will be single and ready to mingle after this time jump.

DOOL fans can also expect a major death to be revealed, so that’s probably Adrienne Kiriakis (Judi Evans). There’s strong buzz about Adrienne getting killed off, which could lead to a Kayla Johnson (Mary Beth Evans) and Justin Kiriakis (Wally Kurth) pairing.

Over with Ciara Brady (Victoria Konefal), she’ll inform Victor Kiriakis (John Aniston) that she’s putting Ben Weston (Robert Scott Wilson) behind her. However, there’s a possibility this is a ploy. Days of Our Lives spoilers also point to Ciara developing suspicions and sharing them with Ben, so they may have a secret plot cooked up.

Of course, we should note that some spoiler info relates to flashbacks and other info relates to what’s happening in the present. It’ll be a big ol’ Salem mess once the time jump strikes! We’ll give you updates as other Days news comes in. Stay tuned to DOOL and don’t forget to check CDL often for the latest Days of Our Lives spoilers, updates and news.