BY hellodrdavis on October 4, 2019 | Comments: one comment
Related : Days of Our Lives, Soap Opera, Spoiler, Television 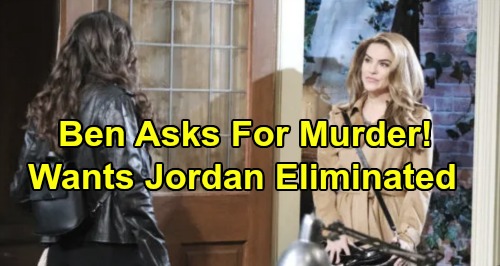 Days of Our Lives (DOOL) spoilers tease that Ben Weston (Robert Scott Wilson) will be feeling desperate. He’s just been through a harrowing experience with Ciara Brady (Victoria Konefal). Ciara was nearly run down and killed by a screeching car in front of the Brady Pub, and that’s got Ben really worried. This happened after Ben had a heated exchange with his sister, Jordan Ridgeway (Chrishell Hartley), during which he demanded that Jordan stay away from Ciara or else.

Well, Jordan didn’t really take well to the threat, and Ben also learned something horrible during that visit with his sister…that she had indeed deliberately crashed the car that killed their mother years ago. That, in addition to Jordan’s past attempts on Ciara’s life, has led Ben to believe that Jordan poses a significant danger to Ciara. Jordan remains steadfast that she didn’t try to kill Ciara with the car, but Ben doesn’t believe her.

Unfortunately, there’s not much that the police can do about the attempt on Ciara’s life. As detective Lani Price (Sal Stowers) explained, unless there’s some credible evidence that Jordan was driving the car that nearly ran Ciara down, there’s nothing the police can do. Jordan’s alibi for the time of the near accident is shaky, but there’s simply nothing to arrest her for at this point. Right now, it’s just Ben’s word against Jordan’s.

It seems that Ben will find himself seriously upset about what he believes is the imminent threat to Ciara. According to Days of Our Lives spoilers, he’ll even start having nightmares about Jordan killing Ciara, and it will just be too much for him to handle. Without any other options, he’ll go to an unlikely source for help…Ciara’s grandfather, Victor Kiriakis (John Aniston).

Of course, Victor isn’t exactly Ben’s biggest fan, and it wasn’t that long ago that Victor tried to get Xander Kiriakis (Paul Telfer) to kill Ben. And when Xander refused, Victor attempted to strangle Ben with a necktie, which he might have done had Brady Black (Eric Martsolf) not walked in and put a stop to the whole thing. At any rate, Victor probably won’t be too happy to see Ben come along and ask for his help.

But Victor just might be willing to listen when he hears what Ben has to say. Ben will tell Victor all about the most recent attempt on Ciara’s life, and he’ll explain about Jordan and the credible threat she poses. Then, Ben will have a shocking ask for Victor – he’ll ask Victor to “eliminate” Jordan from the picture!

But will Ben really intend for Victor to hire some thugs to kill his sister? We’ll see exactly what he ends up meaning by “eliminate.” Perhaps he’ll mean that he’d like Victor to somehow eliminate Jordan as a threat by driving her away from Salem, or something like that. But it’s possible that Ben might just want the unthinkable and ask Victor to actually kill Jordan. After all, extreme situations call for extreme measures.

It will be interesting to see how Victor reacts to Ben’s request. Surely, he’ll want to take action in some way, shape, or form. After all, Victor’s very protective of Ciara and won’t want to see anything happen to her. Ciara is one of Victor’s last links to Bo Brady (Peter Reckell), and he wants to keep her safe. But will he do what Ben wants?

What do you think? Will Ben ask Victor to actually kill Jordan? Stay tuned to DOOL and don’t forget to check CDL often for the latest Days of Our Lives spoilers, updates, and news.