Days of Our Lives Spoilers: Ben & Ciara Accuse Jordan Of Attempted Murder – Is Jordan Out To Kill Ciara?

BY hellodrdavis on September 23, 2019 | Comments: one comment
Related : Days of Our Lives, Soap Opera, Spoiler, Television 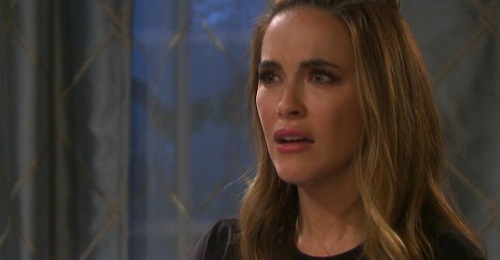 Days of Our Lives (DOOL) spoilers tease that Ben Weston (Robert Scott Wilson) and Ciara Brady (Victoria Konefal) will be on a mission. As DOOL viewers know, they were both completely taken aback when Ben’s sister, Jordan Ridgeway (Chrishell Hartley), showed back up in Salem. She’s now living with Rafe Hernandez (Galen Gering) and has been reunited with her infant son, David Ridgeway, after being deemed psychologically healthy and released from Bayview.

Of course, the problem that Ben and Ciara have with Jordan’s release is that it wasn’t that long ago that she abducted and held Ciara against her will at a remote cabin, then set the cabin on fire with Ciara inside. Jordan’s whole rationale for trying to kill Ciara was that she wanted to “protect” her from Ben, whom she believes is still dangerous. Well, as Ben and Ciara recently discovered, Jordan still feels that Ben is dangerous, and that’s got them really worried.

In fact, Jordan even made some cryptic comments to Ben that suggested she may still want to “protect” Ciara from Ben. It was certainly unnerving for Ben, and now he’s concerned that Ciara might not be safe. After all, what if Jordan decides once again that Ciara or even her son needs to be protected from Ben? Jordan just won’t seem 100% cured to Ben and Ciara, and they’ll find themselves very worried.

But that won’t be the only thing that worries “Cin.” According to DOOL spoilers, Ben and Ciara will have reason to believe that someone has made an attempt on Ciara’s life. Exactly what happens to Ciara remains to be seen, but it will be pretty clear that someone had it out for her, and it will seem like too much of a coincidence that Jordan turned back up in Salem right before it happened.

Ben and Ciara will even report their suspicions about Jordan to the police. According to DOOL spoilers, they’ll tell Lani Price (Sal Stowers) that they think Jordan tried to kill Ciara. But it may be one of those situations where there’s no real evidence to go on, or perhaps the evidence will be inconclusive as to whether there was really a murder attempt. It looks like Ben and Ciara will remain frustrated as the police really aren’t able to do anything, yet they’ll still believe that Ciara is in danger.

Of course, assuming that Jordan does try to kill Ciara, she might get even more dangerous after Ben and Ciara formally accuse her of the deed. Days of Our Lives spoilers say that Jordan will vow to kill anyone who tries to separate her from her son, so she might really go after Ciara (or even Ben) once they start making accusations.

At any rate, it will be interesting to see how things unfold with Jordan. It’s always possible that she won’t have tried to kill Ciara, but it looks like Ben and Ciara will be pretty convinced otherwise. Do you think Jordan poses a danger at this point? Stay tuned to DOOL and don’t forget to check CDL often for the latest Days of Our Lives spoilers, updates, and news.