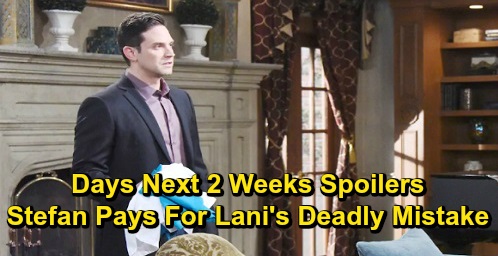 Days of Our Lives (DOOL) spoilers for the next two weeks tease that some huge twists are coming up. During the week of September 23-27, Xander Cook (Paul Telfer) will push Sarah Horton (Linsey Godfrey) to let him be there for her. He’ll want to take Sarah to the abortion clinic, so she’ll ultimately relent.

The trouble is Xander will have an agenda – well, technically Kristen DiMera (Stacy Haiduk) will have an agenda and push Xander to help. Once Sarah’s at the clinic, a doctor will put her under. Kristen will swoop in with Dr. Wilhelm Rolf (William Utay) and prepare for an embryo transfer. She’ll be furious when Dr. Rolf insists he can’t go through with the procedure.

Of course, that anger will turn to joy once Dr. Rolf tells Kristen why. He’ll admit she’s already pregnant, so she’ll be over the moon. Kristen will have an actual miracle baby from Brady Black (Eric Martsolf), so this outcome is better than anything she could’ve hoped for. As for Sarah, it looks like she’ll come to and change her mind before her abortion. She’ll decide to keep her baby, so maybe a switcheroo will occur at some point.

Over with Jack Deveraux (Matthew Ashford), he’ll suffer a head injury that changes everything. Days of Our Lives spoilers state that Jack will get his memories back and enjoy a heartfelt reunion with Jennifer Horton (Melissa Reeves). He’ll also kill Dr. Henry Shah (Piter Marek) in self-defense, so it’ll be a big DOOL week for Jack.

At the hospital, Lucas Horton (Bryan Dattilo) will opt to give Kate Roberts’ (Lauren Koslow) heart to Julie Williams (Susan Seaforth Hayes). He won’t count on Dr. Rolf coming through for Kate with some DiMera doctor magic. Once Kate’s on the road to recovery, that’ll bring relief to Lucas and Will Horton (Chandler Massey). Sadly, it’ll also mean terrible news for Julie and Doug Williams (Bill Hayes).

Julie will prepare to die during the week of September 30-October 4, which will lead to some surprising final wishes. While Julie’s loved ones make promises and try to fulfill those requests, Stefan DiMera (Brandon Barash) will savor an evening of romance with Gabi. They’ll celebrate their love, but tragedy will strike later. Lani Price (Sal Stowers) will be deeply distraught after an on-duty incident presumably costs Stefan his life.

Days spoilers say it won’t take long for Gabi to face heartbreak. She’ll get some horrific updates that leave her torn apart. Elsewhere, Kristen will shock Brady by telling him she’s pregnant. He’ll naturally struggle to believe that. Kristen supposedly couldn’t have kids, so he’ll probably suspect she stole another embryo. To be fair, that was the plan!

However, Kristen will assure Brady this is the real deal. She’ll think this baby proves they’re meant to be, so Brady may finally cave in. Finally, Ciara Brady (Victoria Konefal) will find herself in danger again. She won’t know for sure who was behind this perilous situation, but she’ll suspect it was Jordan Ridgeway (Chrishell Hartley).

Days of Our Lives spoilers say Ben Weston (Robert Scott Wilson) will back Ciara up on that. They’ll take their accusations to Lani, but there won’t be anything she can without proof. It’ll be “Cin’s” word against Jordan’s, so Jordan will remain free for other deadly opportunities. We’ll keep you posted as other Days details emerge. Stay tuned to DOOL and don’t forget to check CDL often for the latest Days of Our Lives spoilers, updates and news.