Days of Our Lives Spoilers: Ben Panics, Races to Stop Jordan’s Murder – Another Driver Revealed in Ciara’s Near Hit-and-Run 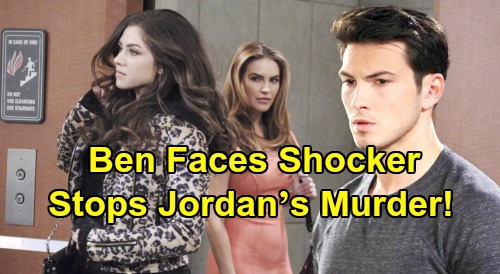 However, Ben’s in for a shock on October 16. Days spoilers suggest there’ll be a major curveball in the investigation, which likely means they’ll catch another driver – perhaps someone who simply had too much to drink that night. If not, it may be someone else who had a reason to target Ciara. Regardless, the evidence most likely won’t point to Jordan. The cops may even score a confession from the true culprit.

Of course, the new developments should leave Ben in panic mode. At Ben’s request, Victor Kiriakis (John Aniston) will be busy plotting Jordan’s murder across town. He’ll tell a hitman to get the job done, which should leave Ben in a desperate race against time. Ben won’t want Jordan’s blood on his hands if she’s not a threat to Ciara after all.

The good news is Jordan will survive – at least for now. The bad news is Jordan is indeed a threat to Ciara. Jordan may not have been behind the incident outside the pub, but she’s still dangerous. This is someone who wanted to burn Ciara alive, and she’s clearly still unwell.

Unfortunately, Ben will probably drop his guard once Jordan’s off the hook. Days of Our Lives spoilers say Ben will deliver a sincere apology to his sister. He’ll be sorry for his false accusations, so Jordan might forgive Ben and even bond with him a bit.

Jordan’s ultimate goal is to protect her son and get rid of anyone who might keep them apart. Ciara could be in more danger than ever if Ben starts to trust Jordan again. He may be lulled into a false sense of security, which could bring some serious DOOL trouble!