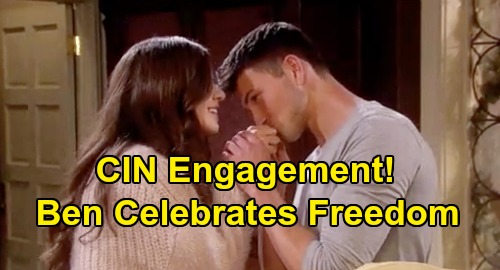 Days of Our Lives (DOOL) spoilers tease that Ben Weston’s (Robert Scott Wilson) luck will finally turn around. DOOL fans know Ben has been locked up for a crime he didn’t commit. Ben wasn’t behind Jordan Ridgeway’s (Chrishell Hartley) murder, but he’s stuck on death row. Things will get pretty scary toward the end of Ben’s legal battle, but he’ll manage to escape this unjust, fatal punishment.

Will Horton (Chandler Massey) is actually the innocent man Victor Kiriakis (John Aniston) and Xander Kiriakis (Paul Telfer) put behind bars. Drunk Maggie Kiriakis (Suzanne Rogers) accidentally killed Adrienne Kiriakis (Judi Evans), but Xander and Victor hid the truth by letting Will take the fall. However, that won’t get Ben any closer to his freedom.

In fact, this shocking development should leave Ciara Brady (Victoria Konefal) back at square one! Her whole theory will be blown. Of course, Victor’s a powerful man who can pull some serious strings. There’s still a chance Victor will be able to come through for Ciara somehow. He might be convinced to help his granddaughter in the end.

Regardless, Jordan’s true killer should be revealed sooner or later, which means Ben will get off the hook. What happens once Ben’s finally free to begin a new chapter with Ciara?

Days of Our Lives spoilers say Ciara and Ben will undoubtedly enjoy a reunion in bed, but what about long-term goals? This is the kind of thing that could spark a major change in their relationship status.

Days buzz suggests that Ben and Ciara may get married in 2020. A big event was filmed just before the cast went on their lengthy hiatus – and several cast members were looking awfully glam, including Konefal. With that in mind, will Ben propose to celebrate his prison release?

Remember that Ben and Ciara were an item during that year fans missed due to the time jump. They’ve been committed to each other for quite some time, even if Ben’s been in prison for a good chunk of it. Days spoilers say Ben will be ecstatic when he’s finally reunited with Ciara on the outside.

It’s easy to imagine Ben deciding he wants to show his devotion to Ciara, who always stood by him and fought so hard for his freedom. An engagement seems like the perfect way to give them a fresh start.