Days of Our Lives Spoilers: Maggie’s Guilt For Adrienne’s Death CONFIRMED – Drunk Driver Has No Memory, Innocent Will Set Up 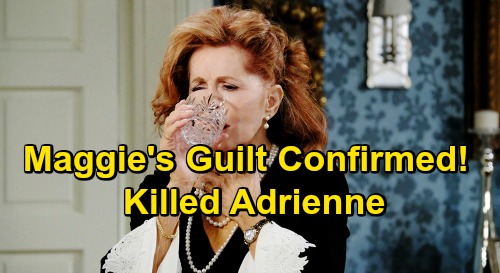 Days of Our Lives (DOOL) spoilers tease that some stunning secrets will be revealed. The month of January will be an explosive one thanks to some crucial flashbacks. DOOL’s going to expose the true story behind Adrienne Kiriakis’ (Judi Evans) death – and it’s one that’ll affect many Salemites as the mystery unravels.

As CDL previously reported, Days insiders have been pointing the finger at Maggie Kiriakis (Suzanne Rogers). We now have confirmation that those insiders are correct. Maggie indeed killed Adrienne, so Will Horton (Chandler Massey) is innocent. It turns out Maggie got drunk on that “horrible night.” Maggie has no memory of causing the accident, so she apparently blacked out after throwing back a few too many.

Victor Kiriakis (John Aniston) learned Maggie fell off the wagon and inadvertently took the life of Adrienne. He conspired with Xander Kiriakis (Paul Telfer) to cover up Maggie’s involvement and pin the whole thing on Will. That’s what led to Xander getting the CEO job and all this talk about the innocent man they put behind bars. It’s Will they’ve been discussing, not Ben Weston (Robert Scott Wilson).

Of course, Ciara Brady (Victoria Konefal) clearly has the wrong idea about what Victor and Xander did. Her efforts to clear Ben’s name could play a huge role in how Will’s innocence comes to light. Now this still leaves plenty of questions for Days of Our Lives writers to answer. What kind of accident killed Adrienne? How exactly did Xander help Victor frame Will? Why is Will so convinced he’s guilty?

There’s no word on the details just yet, but perhaps drunk Maggie got behind the wheel and ran over Adrienne. As for Will, he might’ve been driving distracted in the same vicinity. Will could’ve hit a trash can or some other random object and assumed it was no big deal. If he heard about Adrienne being run over in that same spot later, Will may have assumed the worst – particularly if Xander planted some clue to back it up.