Days of Our Lives Spoilers: Maggie Is Adrienne’s True Killer – Xander and Victor Framed Will to Protect Her? 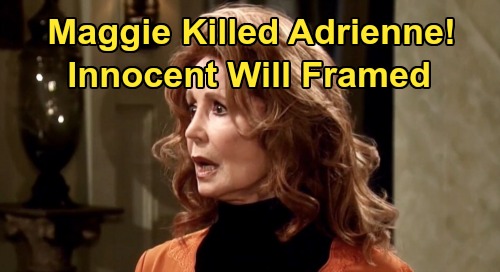 Days of Our Lives (DOOL) spoilers tease that it’s time to start think about the reasons behind a shocking setup. It’s becoming quite clear that Will Horton (Chandler Massey) was framed for killing Adrienne Kiriakis (Judi Evans). DOOL fans know Will accepted responsibility for the accident that claimed Adrienne’s life, but it appears Will only thinks he did it.

After all, Will just told Sonny Kiriakis (Freddie Smith) it was time to move on. He would rather Sonny focus on a future without him, so he pushed for a divorce. Days is crumbling “WilSon” so they can build them back up again, but how can they do that if Will’s guilty behind bars? The truth is they can’t, so there must be some other explanation.

Of course, Will also happens to be Ben’s cellmate and is forming a friendship with him. Justin Kiriakis (Wally Kurth) serves as another overlap between these stories since he signed on as Ben’s attorney. Everything sets up a twist where Ciara Brady (Victoria Konefal) learns Will was the one who was framed, not Will.

The evidence is overwhelming anyway, but now Days insiders insist it’s true. The same people who broke the time jump news insist Will was framed to protect the true culprit. Who might that true culprit be? Days of Our Lives buzz suggests it’s Maggie Kiriakis (Suzanne Rogers), which makes perfect sense.

Both Victor and Xander would have a motive to protect Maggie – not only from prison but from the knowledge that she did this. Days of Our Lives buzz says they probably rigged the evidence somehow so that Will would automatically assume he was to blame and step forward. Maggie would take responsibility if she knew the truth, so she must be completely in the dark.

Victor and Xander would have no problem framing Will for Maggie’s crime. They don’t particularly like Will, and he was probably in the right place at the right time. Victor would want to watch out for his bestie Mags and Victor would want to save his wife from despair. This is an easy motive to accept, so we’re reporting that the reliable DOOL insiders will be right once again.