Days of Our Lives Spoilers: Will Framed For Adrienne’s Death – He’s the Innocent Man Xander and Victor Put in Prison, Not Ben? 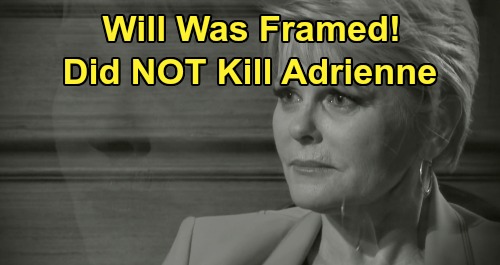 Days of Our Lives (DOOL) spoilers tease that fans may see another huge twist. DOOL’s time jump has already brought plenty of them, but there are definitely more to come. Let’s consider some recent clues and try to figure out where things might go from here.

Adrienne Kiriakis (Judi Evans) lost her life six months ago as well, and it seems Haley Chen (Thia Megia) was also pushed down a flight of stairs at that time. Days viewers know JJ Deveraux (Casey Moss) blames Kristen for that, but Kristen claimed it was an accident. The six-months-ago mark was a crucial turning point in this year off screen.

For now, we want to focus on Xander Kiriakis (Paul Telfer), Victor Kiriakis (John Aniston) and what they’re hiding. It’s pretty obvious that a baby swap went down. When Sarah commented on how she thought Mickey looked like Eric, Xander grimaced nervously. It’s probably because he knows there’s absolutely no reason for the baby to look like Eric. Mickey is most likely Brady and Kristen’s child.

Victor made Xander CEO of Titan shortly after that night, which was clearly a reward for something. Ciara Brady (Victoria Konefal) and Ben Weston (Robert Scott Wilson) suspect Xander killed Jordan Ridgeway (Chrishell Hartley) on Victor’s orders, but that’s way too easy. It wouldn’t be an entertaining story if “Cin” guessed it right off the bat and were exactly right. Days of Our Lives spoilers suggest they could be quite wrong.

Of course, Clyde Weston (James Read) sent anonymous texts to Xander after having Mickey kidnapped. Victor insisted he should make the person spell out exactly what he thinks they did. Clyde replied that they sent an innocent man to prison, so here’s where it gets tricky. If we’re correct and Xander didn’t kill Jordan, then Ben can’t be that innocent man. There must be another innocent man in prison who was framed by Xander and Victor!

Xander decided to write out his confession shortly after this confirmation. He must know they really did put an innocent man in the slammer. That brings us to Will Horton (Chandler Massey), who’s stuck in prison for killing Adrienne. Did he cause the accident that took Adrienne’s life or does he just think he did? Will could easily be the innocent man that Xander and Victor put behind bars.

After all, Victor has never been a huge fan of Will. It wouldn’t bother him to throw Sonny Kiriakis’ (Freddie Smith) husband in jail. Perhaps Xander accidentally caused Adrienne’s death and somehow let Will think he was to blame. Xander might’ve moved forward with his baby swap plans while Will took the fall. He wouldn’t have wanted to mess things up for himself when he was on the verge of building a family with Sarah.

Days of Our Lives spoilers say the whole truth about Adrienne’s accident will be revealed sooner or later. DOOL will need a way to get Will out of prison and help him earn Sonny’s forgiveness. A simple solution is if Will didn’t actually commit the crime!

Do you think Will was set up? Is he the innocent man Victor and Xander had locked up? We’ll give you updates as other Days news comes in. Stay tuned to DOOL and don’t forget to check CDL often for the latest Days of Our Lives spoilers, updates and news.