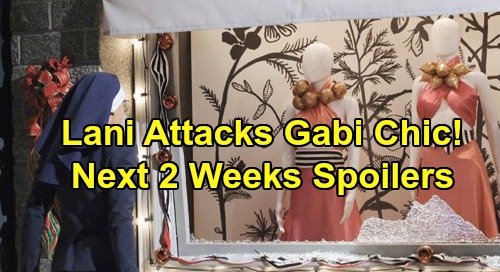 Days of Our Lives (DOOL) spoilers for the next two weeks tease that some shocking moments are on the way. During the week of December 23-27, Kayla Brady (Mary Beth Evans) will lock eyes with a familiar Santa Claus. Stefano DiMera aka Steve Johnson (Stephen Nichols) will swipe Roman Brady’s (Josh Taylor) Santa suit so he can attend the hospital’s holiday party. His goal will be getting close to Marlena Evans (Deidre Hall), but Kayla will nearly blow his plans.

After Kayla has a flash of recognition, she’ll follow Stefano as he tries to flee. Kayla will demand that he turn around so she can see if it’s really Steve. However, an emergency will call Kayla away suddenly and leave Stefano breathing a sigh of relief. He won’t be ready to reveal himself just yet!

Instead, Steve will make sure an onyx brooch ends up in Marlena’s purse. Once Marlena finds it, she’ll realize it ties in with an important part of her past with Stefano. He’ll hope this hint will ease her into the big reveal that’s looming. Over with Xander Kiriakis (Paul Telfer), he’ll have a Christmas surprise for the woman he loves. Sarah Horton (Linsey Godfrey) will get something special from Xander, but there may be a little twist here.

DOOL fans will recall that the NBC soap jumped forward a year in November. That means Salem celebrated a Christmas without us during the year we missed. Days spoilers say we’ll see some flashbacks of the previous holiday, so Xander’s surprise may be in one of those since Sarah’s still in Boston.

Back in the present, Nicole Walker (Arianne Zucker) and Holly Jonas (Harlow and Scarlett Mallory) will enjoy Christmastime with Brady Black (Eric Martsolf). After Nicole watches Brady playing with Holly, she’ll offer her gratitude and impulsively kiss him. That’ll set up some trouble since Kristen DiMera (Stacy Haiduk) will come back to Salem along with Lani Price (Sal Stowers).

Days of Our Lives spoilers say Kristen will spot the kiss and become enraged. However, she’ll delay the attack she’s about to launch. During the week of December 30-January 3, Doug Williams (Bill Hayes) and Julie Williams (Susan Seaforth Hayes) will throw a New Year’s Eve bash. Someone crashes the party every year, so who will it be this time?

A surprising couple will be responsible for the chaos this year, but that doesn’t mean they’ll be involved romantically. We’ve got three returns that need to be revealed: “Steve,” Kristen and Lani. Days of Our Lives spoilers only point to a duo crashing the party, so maybe Kristen will meet up with Stefano and help him go public as “Steve.” It makes sense for this shindig to be where “Steve” first reappears.

Kate Roberts (Lauren Koslow) is another option, but she’ll threaten to expose Stefano’s whole plot before the party ever goes down. That seems like an indication that Kate won’t be the one to unveil him. Kristen is a reasonable option as Stefano’s daughter, so she may show “Steve” off to everyone and offer some excuse for why they arrive together.

Whatever the case, Lani, Kristen and “Steve” will indeed make their presence known at some point. We should mention that Lani will strike an indirect blow the week prior, which could set up a stunning discovery. Days of Our Lives spoilers say Eli Grant (Lamon Archey) will find out that a rock’s been thrown through a Gabi Chic window. He’ll do some digging and uncover a shocker as Days buzz says Lani will be behind this.

Over with Brady, he’ll be floored when he sees Kristen again. Kristen will announce she wants Brady back and will blast Nicole for making moves on him. Gabi will also learn about Lani’s return home while “Steve” makes waves among the real Steve’s loved ones. You can bet “Steve” will face backlash for his rude behavior.

It sounds like the next two weeks will bring loads of drama! We’ll give you updates as other Days news comes in. Stay tuned to DOOL and don’t forget to check CDL often for the latest Days of Our Lives spoilers, updates and news.