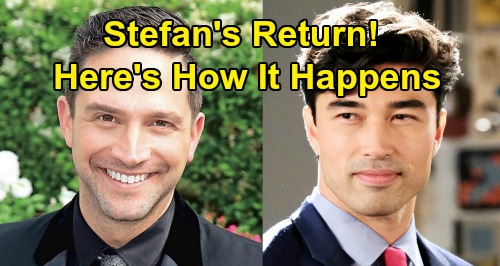 Days of Our Lives (DOOL) spoilers tease that viewers will see a new face in Salem in 2020. But for those who watched the DOOL Digital Series “Chad & Abby In Paris,” that face will look awfully familiar. Remington Hoffman, who portrayed Li Shin in “Chad & Abby In Paris” will be making his way to Salem and to the NBC series in April 2020.

In “Chad & Abby In Paris,” Li ended up firing Chad DiMera (Billy Flynn) after one of his subordinates falsely accused him of sexual harassment and a violent physical assault. Li is the son of the infamous Mr. Shin (Michael Hagiwara), who is often mentioned on DOOL and was seen briefly in scenes earlier this year. Mr. Shin is an influential member of the DiMera Board of Directors, and clearly Li has an important place in the company, too.

Fortunately for Chad, Li was soon given evidence showing that the person who accused Chad of harassment and assault lied. Li then reinstated Chad at DiMera and all was well. But it seems that TPTB have plans for Li to come to Salem and shake things up this spring. And that leads us to wonder whether Li’s arrival in Salem could have anything to do with another return that will likely happen in the spring as well – the return of Stefan DiMera (Brandon Barash) to Days of our Lives.

Brandon Barash’s return to DOOL hasn’t been formally announced yet, but you might remember that he was seen earlier this month in an Instagram post hanging out with Galen Gering, who portrays Rafe Hernandez, and some other Days actors at the NBC studios. That post has since been deleted, but it offered pretty good evidence that Brandon was returning to DOOL.

And that’s something that has fans pretty excited. DOOL viewers would love to see Stefan return from the dead and reunite with Gabi DiMera (Camila Banus). But is that even possible, given the way that Stefan died? After all, he was declared brain dead and his heart was donated to Julie Williams (Susan Seaforth Hayes). But then again, amazing resurrections occur quite often on Days of Our Lives, so you never know.

It’s always possible that Stefan didn’t really die and that Wilhelm Rolf (William Utay) managed to save him without telling Gabi what he was doing. At any rate, it sure seems that Stefan will be returning, and since Brandon Barash was spotted at the NBC studios in early November, then given taping schedules he should be back on air in the spring of 2020.

And interestingly, that’s about the same time that Li will be first appearing in Salem. So, could Li and Stefan somehow be in cahoots while Stefan is in hiding and presumed dead? That would make for an interesting storyline – after all, Li and Stefan must know each other since Li works for DiMera Enterprises and Stefan was the CEO while he was alive.

And if Stefan were to have been secretly saved from death by Rolf, then he’d have needed somewhere to recover – and in Europe with Li would be the perfect place to hide out. We’ll see if any of this comes to fruition, but it is noteworthy that when Stefan returns, it will be right around the time that Li comes to Salem, which could very well be more than just a coincidence.

What do you think that Li’s arrival in Salem will be connected to Stefan? Stay tuned to DOOL and don’t forget to check CDL often for the latest Days of Our Lives spoilers, updates, and news.