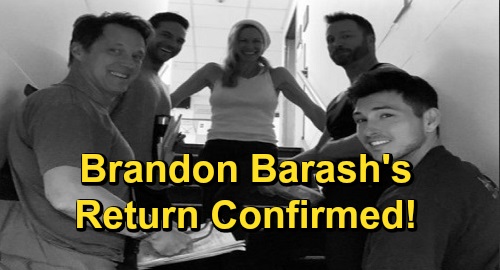 Days of Our Lives (DOOL) spoilers reveal it’s official! There’s confirmation on Brandon Barash’s (Stefan DiMera) return to the NBC soap. Many Days fans suspected it after a blurry photo was leaked in September. We eventually heard from DOOL insiders that it was true and passed the news along, but it’s nice to get some hard evidence for any lingering doubters out there.

Galen Gering (Rafe Hernandez) posted a fun pic in a recent Instagram story, which clearly featured a smiling Barash. Gering soon realized his mistake and deleted it, but screenshots are forever! Of course, it’s not a massive blunder since Gering just confirmed the buzz. Jason47 ultimately said it was true through his Facebook page, so it’s great that Gering put it out there and made the confirmation possible.

Days of Our Lives has an annual event called Day of Days coming up, and they were probably hoping to save the big announcement until then. However, you can bet there’ll be plenty of other surprises and shakeups to reveal. The show shouldn’t sweat it since this is news most of us wanted to hear. It was a huge mistake to get rid of Barash, so kudos to Days for correcting it.

Now that everyone can be convinced it’s a done deal, it’s time to start thinking about how Barash will return. After all, Stefan’s heart was supposedly given to Julie Williams (Susan Seaforth Hayes)! So how can a heartless Stefan make a comeback? It’s easier than you might think through the magic of Dr. Wilhelm Rolf (William Utay).

Dr. Rolf may have replaced the real Stefan with a doppelganger just before his surgery – much like Andre DiMera (Thaao Penghlis) replaced Aiden Jennings (Daniel Goddard) with a lookalike just before he was set to attempt Hope Brady’s (Kristian Alfonso) murder. A flashback explained that once it was time for a Days rewrite, so they could do something similar here.

Then again, maybe the man operated on was wearing a realistic Stefan mask like the one Kristen DiMera (Stacy Haiduk) wore of Nicole Walker (Arianne Zucker). We know Stefan truly got shot, but no one can be sure of any tricks Dr. Rolf might’ve pulled behind the scenes.

Days could also let Barash return as a twin and make him a brand-new character. They’ve got plenty of options, so viewers will look forward to seeing Barash in some form down the road. Days of Our Lives spoilers say Barash’s character will make a grand reentrance!

Gabi DiMera (Camila Banus) is in for a shock, but let’s hope DOOL won’t make us wait too long for that “Stabi” reunion. Banus and Barash have excellent chemistry, so the show will inevitably pair them up again in some form. We’ll live you updates as other details emerge. Stay tuned to the NBC soap and don’t forget to check CDL often for the latest Days of Our Lives spoilers, updates and news.